In an interview with New York magazine last month, teen dullard David Hogg announced that his career objectives had changed. He is no longer seeking to become a TV journalist but instead has his sights set on running for Congress when he is 25.

Maybe by then he will have learned about 52 U.S. Code § 30121, which strictly prohibits contributions and donations to U.S. elections by foreign nationals. If he had known this last week, he could have saved himself and fellow rallier Michael Moore some embarrassment.

The two were addressing a crowd at the Toronto International Film Festival when Hogg said:

I have a question for you guys: Who’s ready to save America? Who’s ready to make America the country we say it is on paper and make it the actual country that it wants to be? I think the most important thing to realize, however, is the problems we face as a country, whether it be water in Flint, Michigan or the amount of mass incarceration of people of color that can’t vote. …

Turn that shame into your vote … if you’re not Canadian. Um. I think Canadians can donate to political campaigns in the United States.

He looked uncertainly at Moore, who you can see shaking his heads and mouthing the words “No they can’t.”

Hogg later repeated the false claim that the Russians had donated $30 million to the Trump campaign through the National Rifle Association, a conspiracy theory that has been soundly debunked.

While Moore did correct Hogg for saying Canadians can donate to U.S. politicians, he did not correct the NRA money-laundering lie, though you can see him fidgeting with his ring as Hogg speaks, ostensibly waiting for the next flub.

Cory Booker lectures John Cornyn (and his fellow Americans): ‘I will love you’
Next Post
Cartoon of the Day: Nobama-nomics 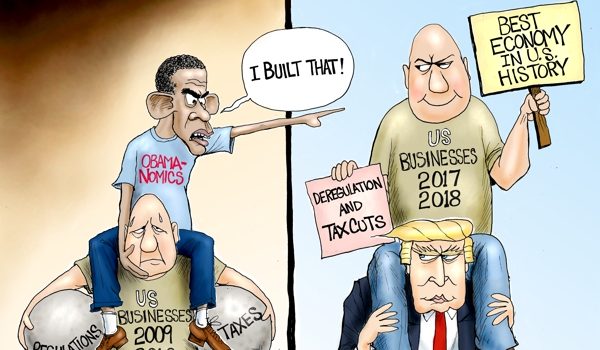