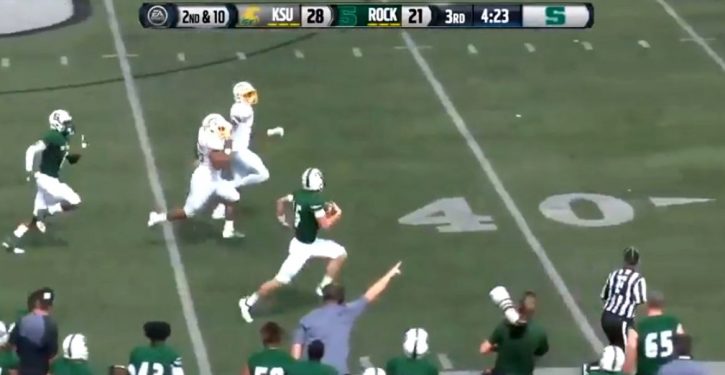 Lightning on this Friday night is delaying the battle for the Iron Skillet, the Storied Rivalry match between our own #16 TCU Horned Frogs and SMU.  So this is an opportune time to catch us up and get ready for the football weekend.  (TCU is scaring us a bit: play has now started, and they’re down 9-0 at the end of the 1Q with a very sluggish start. Update: OK, the real TCU checked in with the 2Q, and in the 3Q is now up 21-12. Update as this goes to post: just clicked up to 35-12, TCU.  Universe in harmony again.)

We note in passing how gratifying it is to see a pair of teams so committed to fine, traditional cookware.  Lesser teams would no doubt have succumbed in recent years to the fad for crummy ceramic-lined skillets hawked by people with weird hair on late-night TV.

The University of Tulsa, which beat Notre Dame 28-27 on 30 October 2010, heads to Austin to take on Texas on Saturday.  The Longhorn give of 23 in this rare meet is probably about right.

September is traditionally when Tulsa has played either OU or Oklahoma State each year, but in the CFP/CFB era, racking up style points is ever more important for the perennial Top 25 aspirants in the cross-conference early weeks – and after multiple seasons of deepening mediocrity, the Tulsa program is a harder sell as a style-point opponent.  This is worth a teardrop or two for diehard Golden H fans, but we’ll soldier on.  Things change.  The pendulum will no doubt swing upward again eventually, for the smallest-enrollment school in the FBS.

Oklahoma, edging up to #6 (which is quite far enough, and let’s not get ahead of ourselves, sportsbabblers), hosts UCLA Saturday at noon Central.  The Bruins managed to lose to Cincinnati last week, and the oddsquad has the Sooners favored by 29.  UCLA didn’t seem to have much on either side of the ball; on the other hand, both they and the Bearcats bring a heavier top-tier talent load than FAU.  So while we’re wary of the points, we won’t come down emphatically either way this week.

Navy is smarting from the season-opening loss to Hawaii last week, and doesn’t get a break on Saturday, other than home field advantage hosting American rival Memphis, which blasted FCS’s Mercer last week 66-14.  Memphis, where Justin Fuente made his name before going to Virginia Tech, continues to be in the top tier of AAC teams, and is in the AAC West alongside Navy.  So this one counts.  The Tigers are giving 6.5.

Army hosts Liberty (now a fellow FBS Independent, if you haven’t been keeping up on these things) for the home opener.  Army’s giving 8, but Liberty stomped Old Dominion 52-10 last week, and certainly has a fighting chance.  Liberty QB Stephen Calvert threw for a healthy 345 yards to a multi-threat receiver corps; the Flames don’t look like a mushy creampuff out of the FBS starting gate.

Air Force heads to Florida Atlantic on Saturday, where the Owls are giving 9 after the great learning experience with Oklahoma.

#12 Virginia Tech took a big vault upward with the win over Florida State, but will be hosting William and Mary (FCS, Colonial) on Saturday for a nice scrimmage.  VT did have a years-long habit of losing these gimmes for no good reason, but it looks like Justin Fuente is putting the lid on that glitch, so we’re hopeful for a resounding win.  We’re optimistic about a very promising start from the Hokies this year.  The defense kicked chicken feathers last week in the Tallahassee outing.

Nevada may just have our freak-occurrence match of the week with a first-ever visit to Vanderbilt.  The two teams have never played before, but they’ll take the field together on Saturday, with Vandy favored by 10.  Both are coming off wins; still waiting to see the Wolf Pack play in order to form a strong opinion.

#11 LSU looked pretty feisty last week knocking off Miami (Da U) 33-17.  We’re wary of how long RB Nick Brossette’s legs will hold out when LSU faces an SEC West defense, and would have liked to see a few more tricks in the offensive bag.  The Aranda D: impressive.  The Zouave Tigers host a cross-ranks bout with Southeastern Louisiana (FCS, Southland) on Saturday.

Kansas State kicks us off early hosting #18 Mississippi State, in what could be a pretty good game.  Bill Snyder has his challenges this year, and had to pull out a win over South Dakota State (which, don’t forget, is ranked #3 in FCS) last week.  The alternating-QBs thing isn’t working that well.  But Snyder rallied the troops for a late surge, and is by no means out of it with the Bulldogs, even as a 7-point dog in the line.

Toledo is off Saturday and will face Miami (Da U) next week.

Wyoming joins Nevada as an Inner Circle team playing a first-ever opponent on Saturday, with a visit to Columbia to take on Mizzou.  This one, while fun and fresh, doesn’t strike us as quite as freaky as the Nevada-Vanderbilt matchup.  The Cowboys are bucking the short end of 19.5 going in, largely due to the head-turning Drew Lock offense busting out at Mizzou.  The Pokes have their work cut out for them.

#3 Georgia will be at #24 South Carolina giving 10.  Ohio State has edged Wisconsin to compete in the #4 slot this week, and gives 35 hosting Rutgers.

Washington has dropped to #9 coming off the loss to Auburn.  The Huskies will be entertaining North Dakota (FCS, Independents).

Stanford debuts at #10 this week, hosting #17 USC for their Storied Rivalry, which fittingly comes with no strange relics or Greek choruses because USC already has a Coliseum and a Shillelagh, and doesn’t have time for that stuff. The Heathered Mauve is favored by 6, and weird things often happen in this game.

The Georgia and Stanford games hold some promise, but other than that, it’s mostly overdogs this week.

A couple of good tips.  The marquee game on Saturday evening on ABC sees new #13 Penn State at Pitt for their Storied Rivalry match, the Keystone Classic.  Pitt had a workmanlike win over Albany last week, and probably isn’t a match on paper for the Nittany Lions, who are giving 7.5.  But PSU showed some vulnerabilities in the OT scare with Appalachian State, so we’re not counting the Panthers out.  Should be worth tuning in for.

Iowa State at Iowa should also offer good football as the Storied Rivals duke it out for the CyHawk Trophy.  Iowa is giving 3.5.

Boston College hosts Holy Cross (FCS, Patriot League) in a rare modern-era recurrence of their Storied Rivalry, which last saw a meet in 1986.  We’re not promising great football, but sometimes that’s not the point.

It also just does our hearts good to see Fresno State head to Minnesota for the first clash ever between these two teams.  Both won their opening games big against overmatched opponents.  But the cool thing is that there are courageous bettors out there actually backing the Gophers by 1, in a game there’s no natch’ral handicapping basis for.  We love it.  ‘Murrica.

In FCS, McNeese State’s win over Northern Colorado in week 1 was good enough for a four-slot bump in the poll, vaulting the Pokes to #14.  They head to Houston Baptist to kick off Southland play on Saturday evening.  HBU slapped Southwest Baptist (Div II) around 49-7 last week.  Muggy and upper 80s for the 6 PM kickoff.

In Div II, Slippery Rock, 1-0 after the win over Kentucky State, launches Pennsylvania State Athletic Conference (PSAC) play at Shippensburg on Saturday.  Shippensburg beat Clarion handily last week.  The weather is coming like a freight train: expect rain, wind, and mid-60s to go with the afternoon game kicking off at 1 PM.

The University of Central Oklahoma (UCO) hosted Nebraska-Kearney in an MIAA bout on Thursday (6 Sep), coming out of it with a relatively respectable 31-27 loss.

In Div III, Rose-Hulman Institute of Technology takes another flyer out of conference, but hosting this time in Terre Haute. The visitors are the Lynx of Rhodes College (Memphis), which play in the Southern Athletic Conference and logged a 21-0 win at home in opening week over Illinois College.

Rhodes College has been a veritable hive of semi-famers in politics and government, with recent notable alumnae including Judge Amy Coney “The dogma lives loudly in you” Barrett and Alison Lundergan Grimes, currently the Kentucky Secretary of State and undergoing a probe for ethics violations.  Late Supreme Court Justice Abe Fortas was also a Rhodes alumnus, and we feel that these facts may have more to do than you might think with the very creditable fortunes of the football program (a winning record under current head coach Jim Ryan, and 11 conference titles in the program’s history).

Lower 60s and rain for the 7 PM kickoff.

Christopher Newport University heads to picturesque Hampden-Sydney, Virginia Saturday to take on its eponymous rival for the one non-conference game of the 2018 season.  The Captains prevailed over Southern Virginia last week 38-9, whereas the Tigers lost to Averett.  Game start is 1 PM, with – you guessed it – 60s and plenty of rain in the forecast.

Merchant Marine, 1-0 after punching Misericordia’s lights out, has the weekend off, but will be back next Friday meeting SUNY Maritime in the Bronx.

Kavanaugh allies deny anti-Mueller back channel, as Dems suggest impropriety
Next Post
Obama’s rant in Chicago was not a campaign speech, just him massaging his bruised ego