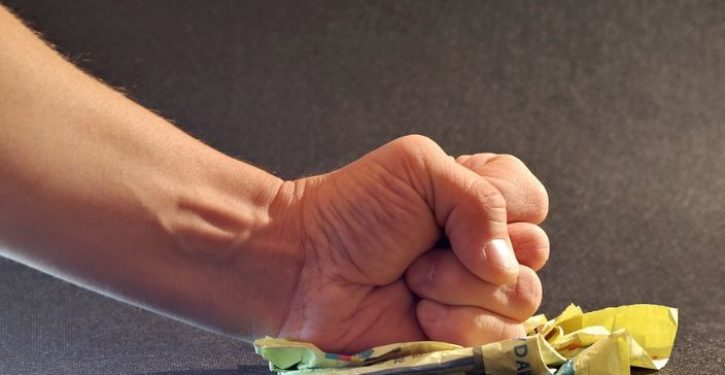 It’s no accident that a liberal group that calls itself Antifa (short for anti-fascist) would take root under the presidency of Donald Trump. In fact it’s almost inevitable. Among all the other pejoratives hurled at the president supposedly by a senior official in the administration who has chosen to remain anonymous — amoral, impetuous, adversarial, unstable — the Left’s favorite descriptor, tyrant, stands alone.

It’s not just a bunch of unschooled liberal wackos who think Trump dreams of being an emperor. It’s schooled ones, too, such as Politico’s Edward-Isaac Dovere, who teased an article in June with the subhead “In the three years since he first descended his golden escalator to announce his presidential bid, Trump has made clear he yearns for fealty along with authority.” Dovere goes on to chronicle Trump’s admiration for Kim Jong un (“He speaks, and his people sit up at attention”), Vladimir Putin, Rodrigo Duterte, and other world leaders whose absolute power he covets.

No wonder the Left is horrified. And make no mistake: It’s not just Donald Trump that scares them. Recall the warning of then-Vice President Joe Biden in 2012, when the man running for his boss’s job on the Republican side was the soft-spoken Mitt Romney: “They’re gonna put y’all back in chains.”

The “they” Biden had in mind was the white community. I recently saw this phrase for the first time, used in a Twitter promo for an article at the HuffPost on the Nike/Kaepernick kerfuffle:

The white community flew into a destructive rage this weekend after Colin Kaepernick was named the face of Nike’s 30th anniversary “Just Do It” campaign. https://t.co/qmIRHKMuyI

I think it’s time that more people spoke out against the destructive rage of the white community. Blaring their Barry Manilow music while they loot the Pottery Barns and carry Dockers out of the shoe stores by the handful. This white menace must be stopped.

But the phrase white community is not synonymous with white people, as Hawkins’s tweet intimates. In fact, some members of the white community are decidedly not white. Candace Owens, for example, is a member, and so is U.S. Ambassador to the U.N. Nikki Haley. Like other members, both are patriots, a term abjured by the Left.

The white community, it should be emphasized, overlaps with, but is not identical to, conservatism. Donald Trump, whom the anonymous New York Times op-ed describes as having “little affinity for ideals long espoused by conservatives,” is a member of the white community in good standing.

So why do I maintain that the Left wouldn’t be averse to tyrannical rule and might even embrace it? One reason is the recent surge in popularity of socialism, which Democrats as a group view more favorably than capitalism. Historically, socialism has given rise to dictators. Although many on the Left, and especially millennials, who are the most gung-ho about socialism, probably aren’t aware of where this ideology leads, neither were the masses in other nations that embraced socialism only to watch it metamorphose into communism.

Another reason I believe liberals would welcome a dictator provided he wasn’t a member of the white community is embodied in recent history. In August 2009, newly-minted President Barack Obama spoke of what he perceived as a need for a “civilian army”:

Here’s a video of members of that army in training:

At the time Obama proposed this astonishing initiative, the legacy media were silent. Much as they enjoyed basking reportorially in the glow of America’s first black president, they weren’t going to touch this story because it frankly sounded mad.

They were less circumspect about reporting on the inexplicable decision by Obama’s Justice Department to drop voter intimidation charges against the New Black Panthers, another paramilitary group, despite overwhelming evidence.

What his angriest opponents accuse Trump of, they immediately manifest themselves
Next Post
Nike’s new ad campaign reveals the company is crazy … like a fox