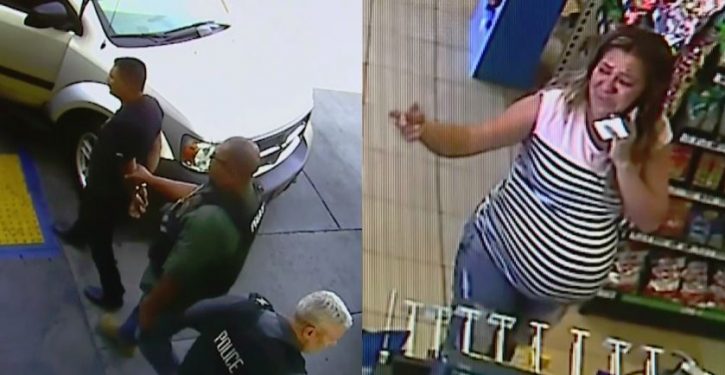 Not all fake news is the same. While some fake news stories are 100% fabricated, others are exaggerations or distortions. When The Patriot-News, a daily serving Harrisburg, ran a guest editorial in June titled “Ripping babies from their mothers’ arms? We’re better than that,” the author not only use charged rhetoric to gin up reader outrage at the Trump administration. She also omitted the fact that not all “family units” detained at the border are actual families or that the number of illegals crossing the border with fake relatives has surged by 900% this year.

This same M.O. — omitting details in a story that would skunk the liberal narrative — was also used in a heart-rending tweet posted yesterday by Kyle Griffin, producer of MSNBC’s “The Last Word”:

ICE detained a man while he was driving his pregnant wife to the hospital. He was taken when they stopped for gas.

"My husband needs to be here," Maria del Carmen Venegas said. "He had to wait for his son for so long, and someone just took him away."https://t.co/rpD8WKwaJZ

Griffin includes a link to a report by CBS Los Angeles, but for those readers who chose not to link through — and many evidently didn’t judging from some of the comments written in reaction to the tweet — the story is a monstrous indictment of administration policy. One reader of the tweet wrote:

This is despicable. Is this what our country has become, taking fathers away when driving their wife to the hospital to give birth? I’m disgusted.

There’s heartless and then there’s whatever the hell this is. https://t.co/qWgPoJ2ABe

So what pertinent detail did Griffin leave out that might have colored readers’ initial reaction? It’s right there in the CBS headline: “ICE Detains Man Driving Pregnant Wife To Deliver Baby, Says He Is Wanted For Homicide In Mexico.”

Yes, the arrest of her husband at this inopportune moment is still a hardship for the new mother, and CBS — itself not the most reliable news outlet around — plays that angle up bigtime. Here’s the lede to the story:

A newborn is without his father Friday after immigration agents detained the man as he was taking his wife to deliver the baby.

But what CBS fails to acknowledge and Kyle Griffin never mentions is that Venegas would have suffered the same hardship had the couple been driving to the hospital in Mexico — which is where the father, Joel Arrona Lara, is wanted for murder.

CNN: Doxxing for me, but not for thee
Next Post
The Washington Post has not always loved John Brennan