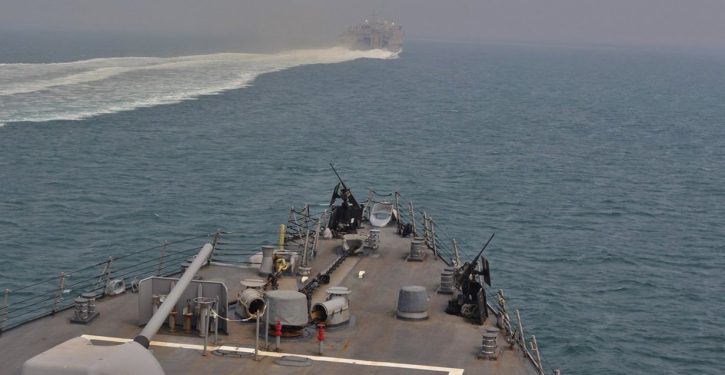 Fox has this buried in a news report about a short-range ballistic missile launch by Iran.  The test launch of a Fateh-110 Mod 3 (nominal range 180 statute miles/300 km) took place last week in conjunction with the maritime control exercise in the Strait of Hormuz, which was notable for its size and unusual timing.

The Fateh-110 is not a nuclear-capable or medium-range missile, and moreover, the Mod 3 is an anti-ship version, tested previously in March 2017.  Testing it thus does not, strictly speaking, violate the terms of UNSCR 2231, the implementation instrument for the Joint Comprehensive Plan of Action (JCPOA) of 2015.  Whether the exercise launch of a Fateh-110 Mod 3 violates the Iran Freedom Policy and Sanctions Act of 2018 is a matter of interpretation.

The real issue with the Fateh-110 launch last week is that its path took it over the Strait of Hormuz.  It went from one point on Iranian territory to another, but would have been intended to send a signal and have an intimidating effect relating to the security of the strait.

That said, the missile may have overflown little of the strait.  Last year’s launches were performed from Bandar-e-Jask, an IRGCN base on a small promontory in the eastern side of the Strait of Hormuz.  If the test launch last week was from the same location, or nearby, the reported 100-plus mile trajectory might have barely have gotten the missile to the immediate east of Bandar Abbas with a little time overwater.

An alternative potential path, further west, could have entailed more time and distance covered over the strait.

The Fateh-110 anti-ship ballistic missile is by no means uninteresting.  But what’s more interesting, frankly, is this brief passage deep in the Fox report:

There were no U.S. military assets nearby or in danger when Iran conducted the test, the official added. The guided-missile destroyer USS The Sullivans has been escorting vessels through the strait in recent days.

Hmm.  Didn’t know USS The Sullivans (DDG-68) was doing that.  That is interesting.  It’s also interesting that in his press availability on 8 August, General Joseph Votel, the CENTCOM Commander, gave several responses to questions about the Strait of Hormuz, but didn’t mention escorting ships there.

He did refer, somewhat obliquely, to continuing routine maritime operations there.  It’s not clear from the Fox report on 10 August whether the “escort” of vessels involves commercial shipping.  If so, it may apply only to certain classes of ships.

The “escorting” may, on the other hand, apply only to U.S. Navy ships.  But, that said, there’s no carrier or amphibious big deck/command ship in the theater – the ships that normally require an Aegis escort for high-risk strait transits – and the other ships that might require escort are (almost) all small specialty units, such as mine warfare ships and patrol craft.  If they were moving through the SOH, that would be a separate category of interesting.

In recent days – on 7 and 8 August, specifically – CENTCOM tweeted images of USS The Sullivans going through the SOH.  On 7 August, the destroyer is described merely as conducting a routine transit through the strait.  (The date of the transit and the image isn’t actually given.)  What appears to be an oil tanker is glimpsed in the background.

PO2 Luis Ortiz Robinson stands watch as the guided-missile destroyer USS The Sullivans (DDG 68) conducts a routine transit through the Strait of #Hormuz. The Sullivans is deployed to @US5thFleet pic.twitter.com/HJXv1jHBb6

On 8 August, The Sullivans was escorting USNS Choctaw County (T-EPF-2), a dual-hulled catamaran designated as an Expeditionary Fast Transport and operated by the U.S. Military Sealift Command (MSC).  (The T-EPFs were previously designated Joint High Speed Vessels, or JHSVs, but they are properly called T-EPFs now.)

Choctaw County was assigned to CENTCOM in 2016, although the ship has performed some operations in the Mediterranean (EUCOM) since arriving in the 5th Fleet (CENTCOM) theater in February 2016.  The T-EPFs are unarmed, but bring significant transport capabilities to support Marines and special forces, as well as helicopter assets for various purposes.

It isn’t clear whether Choctaw County would have been departing the Persian Gulf, or entering it.  Either way, the movement of this asset is of particular interest, with tensions increasing in the SOH as well as in the southern Red Sea.

The Sullivans is the only Aegis escort ship operating in the Persian Gulf and SOH at the moment.  She appears to be doing yeoman work and looks busier than a one-armed paper-hanger.  There is a small fleet of Navy and Coast Guard patrol craft for back-up, but in terms of armed escort for high-value shipping, The Sullivans – along with whatever coalition frigate-or-bigger hulls (if any) are present – is it.  I doubt we’re going to get clarification on what this “escorting vessels through the strait” business is about.  The Trump administration has been tight-lipped on such topics, and I don’t necessarily have a problem with that.

But in the meantime, it’s…interesting.