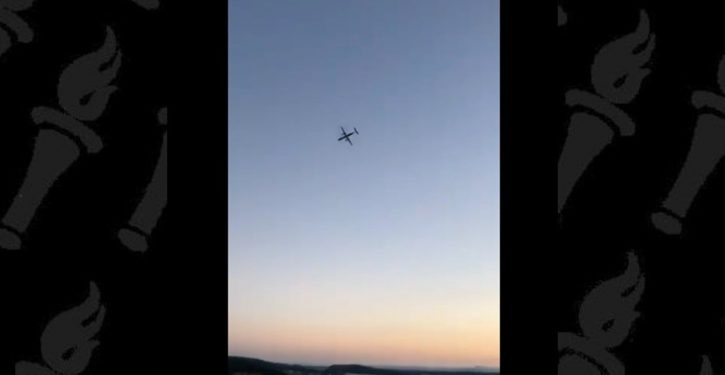 This is a very developing story.

It appears to have happened in the last hour and half, or since 8 PM Pacific Daylight Time (11 PM EDT).  A mid-size aircraft, described in some reports as a Q400 turboprop passenger plane (Bombardier), was stolen from Seattle-Tacoma international airport.  Initial reports suggested the thief literally took off in the plane and was flying around the local Seattle area.  But see below.

F-15s from the 142nd Fighter Wing at the Portland (OR) ANG Air Base were scrambled to intercept the aircraft.  Reports that the aircraft had crashed at or near a golf course near Chambers Bay erupted right around 9 PM PDT.

This tweep had video.

Some dude stole a plane from #Seatac (Allegedly), did a loop-the-loop, ALMOST crashed into #ChambersBay, then crossed in front of our party, chased by fighter jets and subsequently crashed. Weird times. pic.twitter.com/Ra4LcIhwfU

There is no information as to whether the plane crashed of its own accord or was shot down by F-15s.

Seeing unconfirmed reports that the stolen plane has gone down. If the plane's down, not clear if the pilot did it or the F-15s from Portland took it down. #SeaTac

This guy, who is at the airport, says the plane was “hijacked” by a Horizon employee, who didn’t know how to land the plane.

…a Horizon employee just hijacked an airplane here at #SeaTac where I’ve just landed.
He is flying around the airport & he does not know how to land it.
We are trapped on the ground for an unclear & inordinate amount of time.
All ops have ceased.
I just flew into “Die Hard 2”

That would sound like a mid-air theft or takeover of the aircraft.  But I stress we don’t have confirmed particulars at this point.

This guy posted the cluster at SEATAC while the runways were closed to takeoffs and landings.

Its a slow go at #Seatac right now. pic.twitter.com/DO4Bbc0slB

Some tweets seem to suggest a shift in comms frequency during the F-15 intercept, away from an openly monitorable channel.  I haven’t seen any confirmation of that.

It’s 2018. More later if there’s anything substantial to report.

*UPDATE*: Worth adding: a series of tweeted audio clips from Broadcastify. By the time I was into the tweets on this topic, the audio other people were listening to seemed to have terminated.  This is a thread; you can click through to it to hear more clips.

I'm listening through the archive of the radio chatter on the #seatac hijacking. Below are some of the clips. pic.twitter.com/ziBAYv7cgn

It definitely sounds like this guy (“Rich”) had a break of some kind. He doesn’t necessarily sound drunk or slurred to me. Very sad and hard to listen to; it’s probable that he didn’t make it. No word I’ve seen about recovery at the crash site yet, and it’s dark now.

*UPDATE 2*: Emergency vehicles are at the scene of the crash.

Emergency vehicles on scene in Steilacoom near where Horizon plane went down. pic.twitter.com/eMSeg2dFEB

AP now has a report up.  They’re citing Alaska Airlines saying the plane was stolen on the ground, did an unauthorized takeoff, and was empty other than the thief, who is said to be “an airline employee” (implicitly Alaska Airlines, but it’s not fully clear).  A separate police radio report cited in a tweet has him as a 29-year-old male.