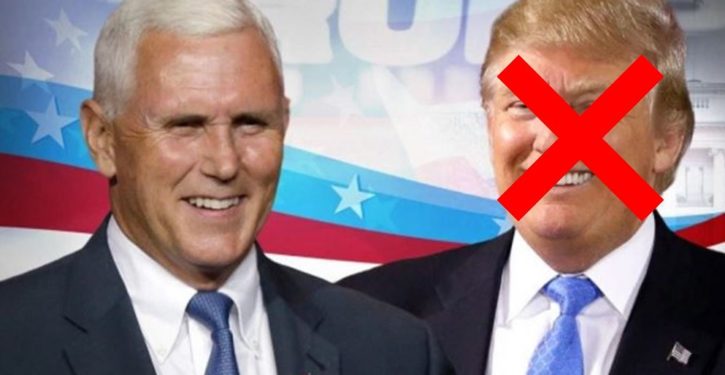 The radical Left is wising up. They are now suddenly aware that if Donald Trump is impeached, as many on the fringe have been clamoring for since before he was sworn in as president, Vice President Mike Pence will take over, in accordance with the rules of presidential succession. (In the current liberal gospel, the only thing worse than a President Donald Trump is a President Mike Pence.)

But what would happen if both Trump and Pence were removed? That’s a tantalizing thought to some Democrats who appear to believe that once the president and veep are out, the field is wide open. That seems to be the thought process responsible for this tweet by Democratic fundraiser Scott Dworkin.

Trump and Pence should be removed from office and we should either have a new election, or Hillary Clinton should take over. That’s how we beat Putin. There is no other way. #ImpeachTrump

Dworkin, who was a bundler during both Obama campaigns, is not alone in this presumption. One of his 360,000 followers on Twitter responded to his tweet with this gem:

Hillary is in fact president. Literally by millions of votes. If he were impeached for his actual treason based on election manipulation, she would need to assume the oval with a clock re-set.

This tweet offers a twofer in faulty thinking. First, Hillary is not in fact president, having won the popular vote but not the decisive electoral vote. Second, regardless of what Obama CIA Director John Brennan may have tweeted, Donald Trump’s remarks in his press conferences in Helsinki with Vladimir Putin didn’t come close to an act of treason.

According to Article Three, Section Three of the Constitution:

Treason against the United States, shall consist only in levying War against them, or in adhering to their Enemies, giving them Aid and Comfort. No Person shall be convicted of Treason unless on the Testimony of two Witnesses to the same overt Act, or on Confession in open Court.

Legal scholars are in agreement, moreover, that “enemies” in this case designates a country on which the U.S. has declared war or is actively fighting. Modern-day Russia obviously doesn’t fall into either category.

SF mayor says her city is drowning in poop: ‘There’s more feces … than I’ve ever seen’
Next Post
Hmm: Putin’s ‘bombshell’ on $400m to Hillary calls attention to Fusion GPS working for … Russia