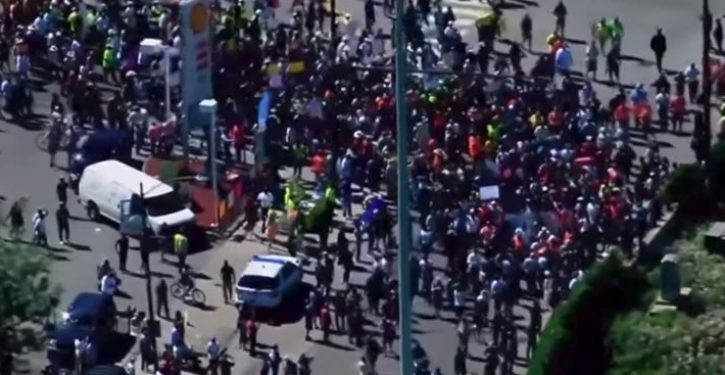 A major thoroughfare in Chicago was shut down on Saturday after thousands of anti-gun protestors overtook the highway, refusing to let any vehicles pass.

Father Michael Pfleger, the chief organizer of the march, had been calling for Dan Ryan Highway to be shut down for weeks prior to the event.

“Inconvenience is the point. We want [people] to be inconvenienced, to think about what the South Side and West Side go through every day,” he told the Chicago Tribune.

Illinois State Police, who have jurisdiction over the highway, initially said any disruptors would be arrested. However, the state police backed down, allowing protestors to occupy half of the northbound lanes, according to The Chicago Tribune.

Shortly after the demonstration began, Pfleger and Rev. Jesse Jackson again called for protestors to shut down the entire highway and bring traffic to a total standstill. Chicago Police complied with the march’s request, against the apparent request of Republican Gov. Bruce Rauner.

Chicago Mayor Rahm Emanuel replied to the governor, tweeting “It was a peaceful protest. Delete your account.”

I’m disappointed in the Mayor. There was an agreement in place. I am calling on the Mayor to take swift and decisive action to put an end to this kind of chaos. I will work with him in good faith and urge him to do his job so that the people of Chicago feel safe.

Emanuel did not attend the event, however, his police Superintendent Eddie Johnson took part in the protest.

Chicago has almost a fully Democratic government, and Illinois is the single-most Democratic dominated state in the U.S.