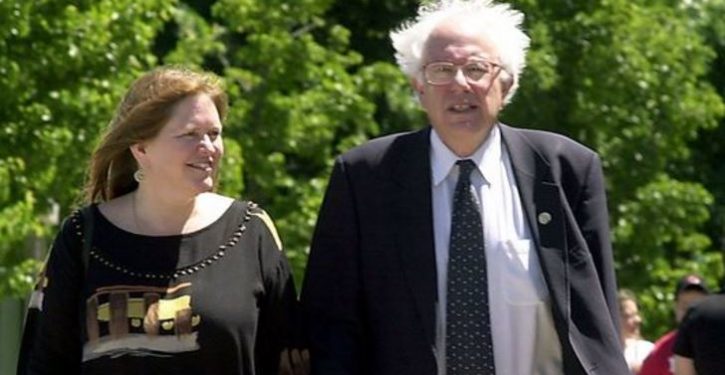 A fine selection of liberal tweets was memorialized earlier today on the topic of Justice Anthony Kennedy’s retirement, which LU’s Ben Bowles reported on Wednesday.  Liberals are having a tough time with Kennedy’s decision, and they’re expressing their feelings vociferously.

But another tweet begs to be highlighted before the week draws to a close. In a week that has seen big, rift-opening developments — the Kennedy retirement, the Democratic upset in New York by Socialist Alexandria Ocasio-Cortez — Senator Sanders has now clarified that “in many ways,” the Democrats “did win the [2016] election.”

Bernie Sanders at a book party in DC says “in many ways we did win the election.” pic.twitter.com/dPeJwsnIMo

As the original Bernie-crat, Sanders seems to be referring to a move to the left by some Democrats and Democratic voters.  Washington Free Beacon observes that his audience at a D.C. book signing didn’t appear particularly convinced.

According to WFB‘s Conor Beck, Sanders made the best case he could:

Sanders pointed to Senate Democrats’ embrace of Medicare-for-all, a move that shows the leftward lurch the party has taken over the last few years.

Sixteen Democrats cosponsored a universal Medicare bill this year. Zero did a few years ago.

Sanders also pointed to primaries in New York and Virginia where far-left candidates won their primaries.

“Occupying” the Democratic Party probably does seem like a win to Sanders, after the 2016 primaries were rigged against him.

A bit of socialist gloating didn’t keep him from jumping on the Democrats’ bandwagon regarding the Kennedy replacement.  He’s standing with Chuck Schumer (D-NY) and the gang on that one:

We should listen to what Sen. McConnell said in 2016. President Trump should not nominate, and the Senate should not confirm, a Supreme Court justice until the American people have had the opportunity to make their voices heard in November. https://t.co/JjyEavC3O3

Of course, the correct precedent is the one from 2010, when the Democratic president and a Democrat-held Congress moved Elena Kagan through to her seat on the Supreme Court, right before the midterm election.

It’s not Mitch McConnell Sanders should be looking for examples from; it’s Harry Reid, the scamp who rammed that Kagan nomination through in an election year.

Reid also, as you’ll remember, in 2013 lowered the vote requirement to break a filibuster from 60 to 51 — which is why the Senate Republicans can confirm a Supreme Court nominee with 51 votes in 2018.  Howard Portnoy commemorated that thoughtful move for us on Thursday, highlighting the key point that Chuck Schumer was standing at his side.

McConnell, then minority leader, cautioning Harry Reid not to invoke the “nuclear option” — lowering the vote threshold for confirmation for judges and Cabinet officials from 60 to 51 votes. McConnell as majority leader added Supreme Court Justices to the lower threshold. https://t.co/Oeh7lRXasY

Reid’s tweet at the time has been pretty popular in the last 24 hours.

Thanks to all of you who encouraged me to consider filibuster reform. It had to be done.

No, Senator.  Thank you.

In the meantime, it’s at least a relief to hear from someone other than Hillary Clinton about the 2016 election.  Sanders, in his fringe-y, sourpuss way, comes off as provisionally positive, instead of chasing down more innocent bystanders to blame for what was, technically, a Democratic loss.

GOP senator: Longstanding alliance with Turkey ‘slipping away’
Next Post
Goodlatte: In closed-door deposition, it was FBI lawyers telling Strzok not to answer questions