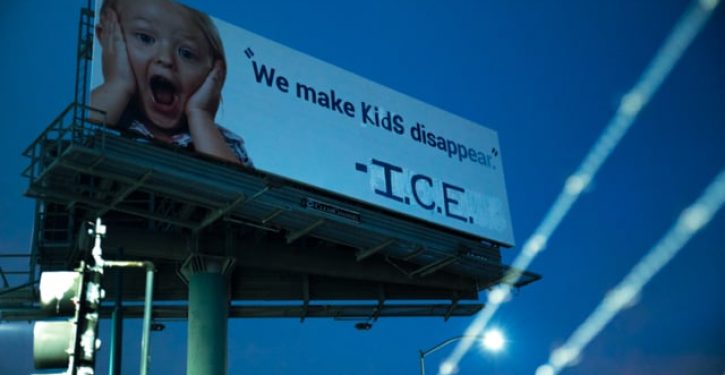 Vandals transformed a billboard for a junk removal company into a fake advertisement for U.S. Immigration and Customs Enforcement that read “We make kids disappear” in Emeryville, Calif., on Thursday.

An “activist art collective” that calls themselves Indecline is responsible for defacing the billboard paid for by 1-800-GOT-JUNK?, reported The Mercury News.

“‘Indecline would gladly apologize to [1-800-GOT-JUNK?] the moment our racist president issued an apology to the families he destroyed,” an anonymous member of the collective told The Daily Caller News Foundation in an email Friday. “As for reimbursements, this is the cost of the war we are fighting against this administration. We’re far from done.”

Indecline posted a video on Vimeo that shows the billboard before it was vandalized and hooded, unidentifiable individuals disabling the lights shining on the billboard and painting over the advertisement.

The final product was a photo of a child with a surprised expression next to the phrase “We make kids disappear – I.C.E.”

Indecline lists itself on its website as “comprised of graffiti writers, filmmakers, photographers and full-time rebels” focused on “social, ecological and economical injustices carried out by American and International governments, corporations and law enforcement agencies.”

The group has a merchandise shop selling ninja masks printed with the phrase “Legalize crime,” a riot stick described as a “durable and menacing 11-inch tactical baton” and a statuette of President Donald Trump called the “Emperor Has No Balls Figurine.”

The fake billboard ad is a response to immigrant family separation, which Trump temporarily banned with an executive order Wednesday.