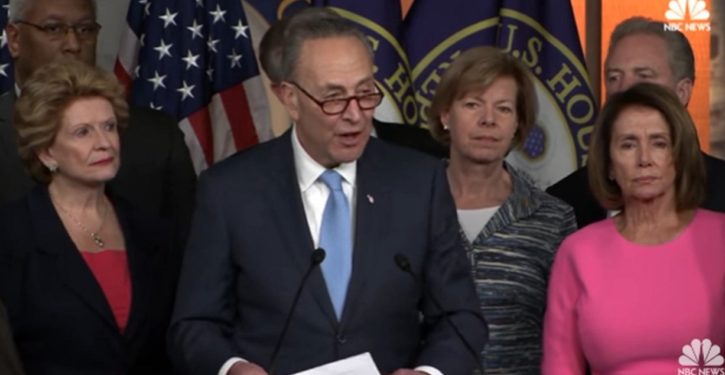 On Monday, we carried a Web Crawler headline on Senator Ted Cruz’s (R-TX) proposal to halt family separations for those illegally crossing the U.S. border with their children.

While the number of such people is comparatively small, the separations are obviously undesirable.

Out of nearly 12,000 migrant children being held in U.S. facilities, some 10,000 arrived unaccompanied, meaning their parents sent them on the perilous journey north through Mexico alone.  The other children, around 2,000, of them, are the ones at issue.  It is not routine to separate them from their parents:

DHS does not have a blanket policy of separating families at the border.   However, DHS does have a responsibility to protect all minors in our custody.  This means DHS will separate adults and minors under certain circumstances.  These circumstances include: 1) when DHS is unable to determine the familial relationship, 2) when DHS determines that a child may be at risk with the parent or legal guardian, or 3) when the parent or legal guardian is referred for criminal prosecution.

But it does happen, when the reasons cited by DHS are present.  Cruz’s proposal is the sensible one I would advocate: to ensure that we can halt the separations as quickly as possible, by expanding family accommodations; and to accelerate the processing of arriving migrants by adding judges and other administrative capacity.

This proposal is too sensible and effective for the Democrats.  The main reason, apparently, is that it would enable us to stop the family separations while also continuing to enforce the law.

I am not exaggerating here.  That’s what Senate Minority Leader Chuck Schumer (D-NY) said on Tuesday, in a comprehensive rejection of Republican proposals to halt family separations.

Senate Democratic Leader Charles Schumer (N.Y.) on Tuesday dismissed a legislative proposal backed by Republican leaders to keep immigrant families together at the border, arguing that President Trump could fix the problem more easily with a flick of his pen.

“There are so many obstacles to legislation and when the president can do it with his own pen, it makes no sense,” Schumer told reporters. “Legislation is not the way to go here when it’s so easy for the president to sign it.”

Sign what?  Schumer means Trump should sign an order to not enforce the law.  (Or, Trump could do what Obama actually did, which was allow a subordinate in DHS – not even the Homeland Security Secretary, but a lower-level official – to sign an internal memo that would result in “catch and release.”)

Remember that, next time someone starts complaining that Trump is introducing executive imperialism.  Trump and Republicans in Congress want to mount a constitutional, collaborative effort to enforce the law while eliminating an undesirable side effect.

It’s the Democrats who want the president to unilaterally not enforce the law.

The Democrats’ emphasis is on backing Trump into a corner.  Schumer said so:

Asked if that meant Democrats would not support a bill backed by Senate Majority Leader Mitch McConnell (R-Ky.) to keep immigrant families together while seeking asylum on the U.S. border, Schumer said they want to keep the focus on Trump.

Schumer’s opposition to a legislative fix means there likely won’t be a quick end to the emotional images of immigrant children being separated from their families unless Trump backs down and reverses his “zero tolerance” policy.

But why should Trump have to reverse his “zero tolerance” policy?  What kind of vicious, deceptive wording is that?  Can you name other laws for which we should not have zero-tolerance policies?  Let’s do that with environmental laws and equal-opportunity laws.  Sign memos in advance stating which clear violations of the laws we will tolerate.  Any takers?

Grand theft?  Embezzlement?  Vehicular manslaughter?  Murder?  A little bit of any of these is OK, because some people do feel like there are benefits to stealing, driving drunk, and hacking spouses to death, or shooting uncooperative armed-robbery victims?  Let the president, or a state governor, decide how much is the right amount?

Schumer obviously doesn’t care about children or family separations at the border.  He cares about extorting Trump, with emotional images of children, to get Trump to gut the enforcement of U.S. law.  Remember that.

Press will stop at nothing to get Scott Pruitt; latest overreach requires major retraction
Next Post
Following the ‘secret stuff’ bread crumbs on Russiagate – Part 1: The Comey alibi