Joe Scarborough asked if White House Press Secretary Sarah Sanders is ignorant or just constantly lying to the public about immigration and compared the administration’s policies to Nazis on “Morning Joe” Friday.

The show opened with clip of Sanders promising that the Trump administration would “enforce the law” with regard to immigration, and Scarborough claimed President Donald Trump’s policies are not in line with the law of the land.

“The question is, is she ignorant, which would actually be better for her if she just were — came out and said ‘I’m ignorant and I don’t know what I’m talking about’. Or is she a liar?” Scarborough said. “Because it’s not the law. This is Donald Trump’s interpretation of the law.”

Scarborough continued to bash Sanders and tried to claim the moral high ground by citing her references to the Bible.

“You think she would lie that many times?” Scarborough continued. “I saw Rudy [Giuliani] last night, he was lying. But we’re familiar with that. We’re used to that. So do you think she really — I just don’t understand why and for somebody quoting the bible, as much as she was quoting the Bible — that’s why I hope that she’s just completely ignorant and isn’t lying on purpose to the American people. That many times, Mika, that would be terrible.”

Scarborough capped off the discussion by comparing the government’s processing of illegal immigrants to Jews in a concentration camp, while continuing to accuse Sanders of blatant dishonesty.

“Why is she lying this much? I know children are being ripped from their mother’s arms, even while they’re being breast-fed. I know children are being marched away to showers. I know they’re being marched away to showers, are being told they are. Just like the Nazis had said that they were taking people to the showers and then they never came back,” Scarborough concluded.

“You think they would use another trick like hey, got a Slurpee room over there. We’re going to take them to get them a Slurpee. That would be better than we’re marching them to the showers and we’ll be right back and they never come back.” 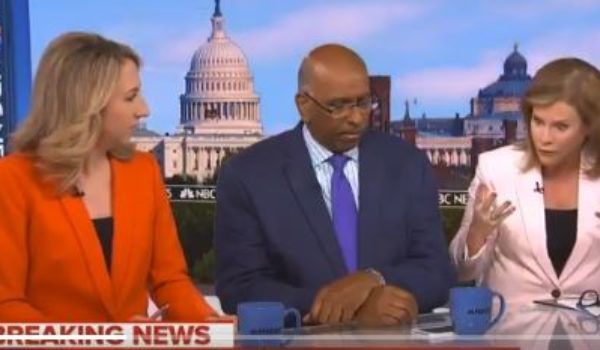