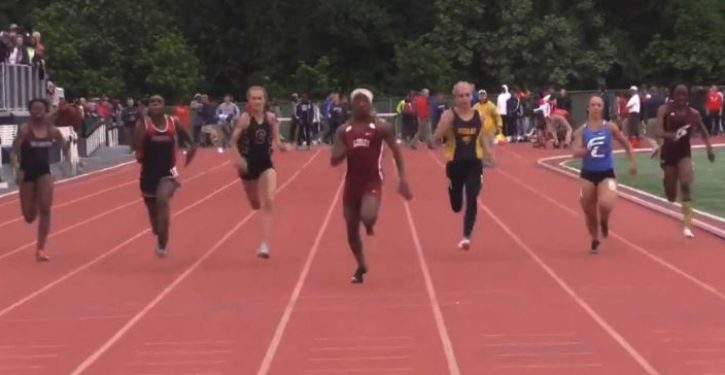 Let me see if I have this right. Naming the student with the highest grade point average valedictorian is wrong because it hurts the feelings of `students who didn’t perform as well scholastically. But when it comes to athletics, students’ feelings be damned.

That’s one takeaway from the outcome of the girls’ 100- and 200-meter dash at this year’s Connecticut State Open track and field championships. Both races were won by Terry Miller of Bulkeley High School in Hartford. Miller set records in both events. And because she is only a sophomore, she will have two more chances to compete and break her own records.

Just one small problem: Terry Miller is transgender, born as a biological male. Miller, who competed on the boys’ team during the winter indoor season, is still technically a male, having undergone no sort of hormonal treatment. Merely “identifying” as a female was sufficient to win Miller a spot in the girls’ competition.

So how do the other girls — the ones born with female anatomy — feel about all this?

We do feel for them, fully agree it doesn’t feel good. The optic isn’t good. But we really do have to look at the bigger issues that speak to civil rights and the fact this is high school sports.

As with the decision on the part of schools to discontinue the tradition of anointing one student valedictorian, the real winner in this competition is political correctness. Humanity finishes last.