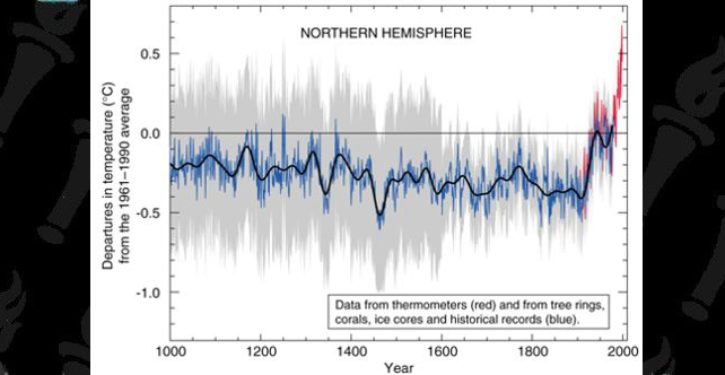 Mann used the 20-year anniversary of the graph to opine on the “industry-funded” attacks “to discredit the iconic symbol of the human impact on our climate,” which Mann claimed had withstood criticism.

“… [I]n the 20 years since the original hockey stick publication, independent studies again and again have overwhelmingly reaffirmed our findings, including the key conclusion: recent warming is unprecedented over at least the past millennium,” Mann wrote in Scientific American on April 20.

However, two Canadian researchers who found serious flaws in the “hockey stick” study’s data and methodology disputed Mann’s characterization of the graph’s legacy.

“For everyone else the debate was about data and statistical methods,” Ross McKitrick, an economics professor at the University of Guelph in Canada.

“For Mann, judging by his rant, it was all a giant political conspiracy against him and his heroic crusade to save the planet. He still won’t acknowledge the errors in his work,” said McKitrick who co-authored a 2003 study with mining executive Steven McIntyre that challenged Mann’s work.

Mann’s “hockey stick” graph, first published in 1998, was featured prominently in the U.N. 2001 climate report. The graph showed a spike in global average temperature in the twentieth century after about 500 years of stability.

The “hockey stick” went viral and become a rallying cry for environmentalists and politicians who opposed fossil fuels and wanted climate policies. Former Vice President Al Gore even featured the “hockey stick” graph in his 2006 film “An Inconvenient Truth.”

The graph came under intense criticism, even sparking an investigation by GOP lawmakers. Global warming skeptics were heavily critical of the graph, especially in the wake of McKitrick’s and McIntyre’s 2003 study. Their study found serious flaws in the proxy data Mann relied on to estimate temperatures going back hundreds of years.

The Canadians’ 2003 study showed the “hockey stick” curve “is primarily an artifact of poor data handling, obsolete data, and incorrect calculation of principal components.” When the data was corrected it showed a warm period in the fifteenth century that exceed warmth of the twentieth century.

3/ in our papers, we did not take a position on modern warm period vs medieval warm period. We pointed out gross errors in Mann's methodology, defects in the most critical proxies, and false claims about skill and robustness (what Mann called his "dirty laundry" in a CG email)

McIntyre and McKitrick also published a study on Mann’s “hockey stick” graph in 2005.

However, Mann wrote that “dozens of groups of scientists” had validated his 1998 study. Mann specifically pointed to a 2006 U.S. National Academy of Sciences (NAS) report that “affirmed our findings in an exhaustive independent review published in June 2006.”

Even McIntyre said subsequent studies have “produced somewhat hockey-stickish temperature reconstructions,” but added “none of our specific criticisms of Mann’s methods, proxies and false claims has been rebutted.”

“The NAS report did not vindicate him, it said his methods were biased, and his results depended on faulty bristlecone pine records that shouldn’t be used by researchers,” McKitrick told The Daily Caller News Foundation by email.

“The NAS panel also cautioned against conclusions about warming more than 600 years back and said uncertainties were being underestimated,” McKitrick said. “That criticism applies to many subsequent studies as well.”

Indeed, the 2006 NAS reviewers agreed with the “substance” of Mann’s study but noted “claims for the earlier period covered by the study, from AD 900 to 1600, are less certain,” Nature.com  reported at the time.

The NAS noted the uncertainties were “not communicated as clearly as they could have been” and “confirmed some problems with the statistics,” but those problems only had a minor impact on the overall finding, Nature.com reported.

However, NAS reviewers were extremely critical of the U.N. Intergovernmental Panel on Climate Change for featuring the report so prominently in its 2001 assessment.

“The IPCC used it as a visual prominently in the report,” Kurt Cuffey, an NAS reviewer told Nature.com. “I think that sent a very misleading message about how resolved this part of the scientific research was.”

At the time, Mann said he was “very happy” with the NAS’s results and in the years since, used his experience in defending the “hockey stick” to effectively label himself as a martyr for fighting global warming. Mann said attacks against him continued despite other researchers validating his results.

“There is no legitimate scientific debate on those points, despite the ongoing effort by some people and groups to convince the public otherwise,” Mann wrote in April as part of a screed against his critics.

Mann asks ‘What more noble cause is there than to fight to preserve our planet.’ How about the noble cause of not misleading readers with biased methods and bad data?” McKitrick said.

Judge rejects Mueller’s request for delay in Russian troll farm case
Next Post
Poll: The blue wave that had been forecast in November has turned into a red wave