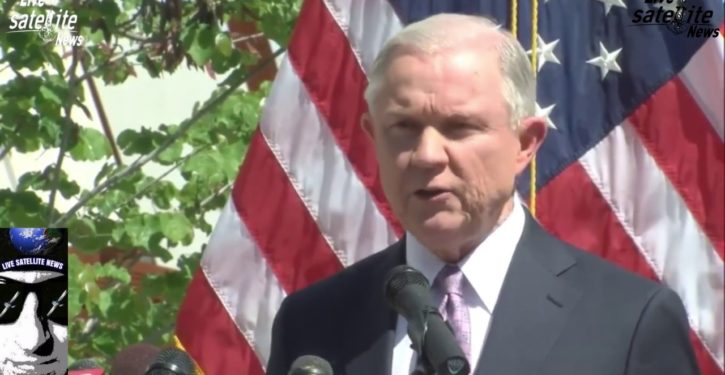 A new report from the House Permanent Select Committee on Intelligence backs up testimony from Attorney General Jeff Sessions about a hotly contested exchange he had during the 2016 presidential campaign with Trump adviser George Papadopoulos.

Reuters reported back in March that three anonymous sources had disputed Sessions’s claim that he had rebuffed a suggestion from Papadopoulos that members of the Trump campaign meet with Russian government officials during a March 31, 2016, meeting of the Trump foreign policy team,

“Yes, I pushed back,” Sessions told the House Committee on the Judiciary during a Nov. 14 hearing.

Sessions told the House Intelligence Committee during a closed-door interview on Nov. 30:

I felt like, and I’m the chairman of this group — I should not do anything that indicated to Mr. Papadopoulos that he was authorized to go to Russia or anyplace else to represent the Trump campaign and do some sort of negotiations. So I pushed back pretty sharply on that.

But according to Reuters, one of its anonymous sources said that Sessions did not contest Papadopoulos, as he has claimed. According to the source, Sessions responded, “OK, interesting,” to Papadopoulos, who has pleaded guilty to lying to the FBI about his contacts with Russian nationals while serving on the Trump campaign.

Reuters’s other two sources recalled a similar response. “It was almost like, ‘Well, thank you and let’s move on to the next person,’” one source told Reuters.

The Reuters report was picked up by numerous other news outlets. It fit the narrative that Sessions has made inconsistent statements about encounters with Russian government officials.

Democrats have hammered Sessions for failing to disclose in his Jan. 10, 2017, Senate confirmation hearing that he met Russia’s ambassador, Sergey Kislyak, during the campaign season. Sessions later said that one of his meetings with Kislyak occurred in relation to his work as a senator. He’s claimed that two other encounters with Kislyak were inconsequential greetings that occurred on the sidelines of political events.

On Friday, the House Intelligence Committee released a report that cited two witnesses who testified that Sessions did indeed reject Papadopoulos’s offer of a Russia meeting. Two other meeting attendees have said they recall Sessions shooting down Papadopoulos’s idea.

Sessions’s account of his response has been corroborated by another attendee, [redacted]. [Redacted] also attended and similarly recalled that when Papadopoulos raised the issue of obtaining contacts with the Russian government on behalf of the campaign, Senator Sessions interrupted and began “talking about the Logan Act,” which criminalizes unauthorized negotiations with foreign governments.

The names of the two sources who corroborated Sessions are redacted in the 253-page report, which was authored by Republicans on the House Intel panel. But the footnotes reveal the dates on which the testimony was provided, and a check of a report written by House Intel Democrats shows that the two meeting attendees are Walid Phares and Sam Clovis.

Phares was an adviser to the committee while Clovis served as national co-chairman of the campaign.

“When it got to George, he said something about meeting with Russians,” the attendee told TheDC in August.

“It was kind of strange, frankly, because he’s basically a young kid and he’s raising this issue. It just came and went and there was really nothing there.”

In their report, House Intel Democrats did not address the Sessions-Papadopoulos exchange.