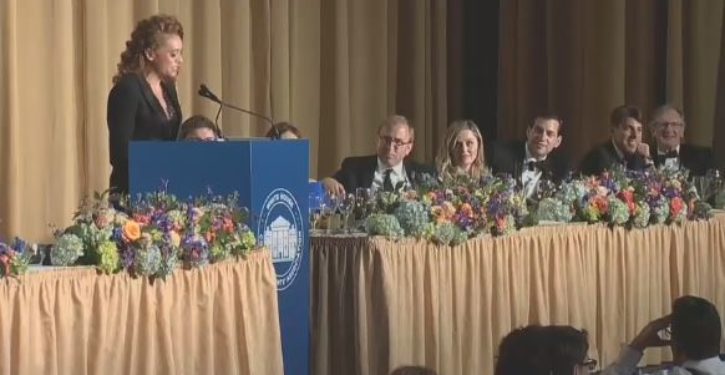 About the only funny thing that came out of last night’s White House Correspondents’ Dinner was the chyron on the screen during CNN’s coverage of the event, which read “President Trump Again Skips Dinner that Celebrates First Amendment.”

The president did indeed again beg off this year’s WHCD, correctly anticipating that a press that is almost uniformly hostile toward him as a person and leader would use the evening to double and triple down on its daily savagery.

Most reports this morning focus keynote speaker Michelle Wolf, who writes for Comedy Central’s “The Daily Show with Trevor Noah.” Wolf’s attempt at humor was described optimistically by Politico as “risque and uneven” and “at first met with laughs but often greeted by awkward silence.”

One of her primary targets was White House Press Secretary Sarah Sanders, who — despite the Left’s professed distaste for misogyny — was mercilessly ridiculed for her appearance, her character, and even her southern roots. Sanders, who sat “at the head table on stage stone-faced, wincing and at times raising her eyebrows,” acted essentially as a surrogate for the president himself.

Not everyone in the room showed the same pluck. White House Director of Strategic Communications Mercedes Schlapp and her husband, conservative activist Matt Schlapp, were among those who got up and walked out.

Typical of the “jokes” Wolf told was this witty barb:

I actually really like Sarah. I think she’s very resourceful. But she burns facts and then she uses that ash to create a perfect smoky eye. Like maybe she’s born with it, maybe it’s lies. It’s probably lies.

Presidents don’t always want to show up and tell jokes and socialize with the press corps, but until now it’s been a part of the job in the modern media age.

That’s arguably true, but is there any doubt that Stelter or any of his other thin-skinned colleagues at CNN would have headed for the door after Wolf’s first salvo had the target been them or, better still, Barack Obama?

Holding a presidential roast by the media may have seemed like a good idea once upon a time, a way of humanizing politics and politicians. But that was before the press outed itself as the hyper-partisan collection of windbags it became in the second half of the twentieth century.

The most humane thing to do with the White House Correspondents’ Dinner would be to take the tradition out back and put it out of its — and our — misery.