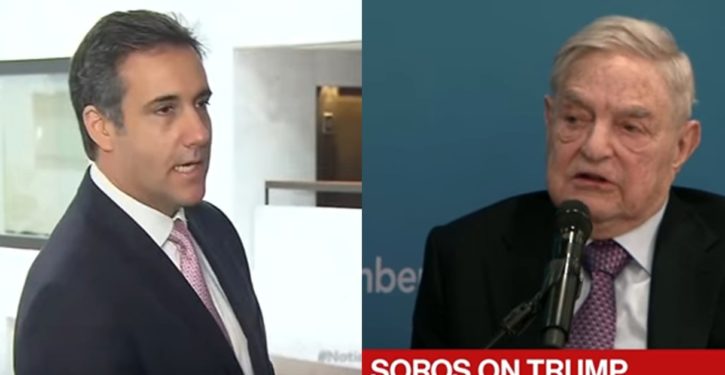 This matters.  We brought you a headline earlier today on the report that the third “mystery” client of Michael Cohen – a list that became of interest to some after Cohen’s home and office were raided by the FBI – was radio and Fox News personality Sean Hannity.

The judge in the case insisted that the identities of all of Mr. Cohen’s clients be revealed to the court:

At the hearing before Mr. Hannity’s name was revealed, Stephen Ryan, an attorney for Mr. Cohen, said the then-unnamed client didn’t wish to be associated with the notoriety of the search warrant. He said revealing the client’s name would “affect people’s willingness to consult an attorney,” eliciting laughter from the crowded courtroom.

Judge [Kimba] Wood ordered his attorneys to provide the name in court, saying Mr. Cohen’s team “has not met the standard for an exception to the notion that client identity…must be revealed.”

Some of you, like me, will remember the name Kimba Wood.

Yes, it’s the Kimba Wood whom Bill Clinton tried to appoint as his attorney general in his first months in office in 1993.  She had to step down as a nominee when it was discovered that she had been employing an illegal as her child’s nanny.

As Gateway Pundit notes, Wood also presided at the 2013 wedding of George Soros, then 83, to his third wife, Tamiko Bolton (then 42).

The U.S. political guests at that event are easy enough to spot:

From the U.S. political realm those invited included Minority Leader of the U.S. House of Representatives Nancy Pelosi and the lieutenant governor of California, Gavin Newsom, both Democrats.

But unless you’re looking hard (or, like your correspondent, already knew), you might miss the point that one of the out-of-town Soros wedding guests was then-President Toomas Hendrik Ilves of Estonia.

Among the reception guests were World Bank President Jim Yong Kim and some foreign leaders, including Hendrik Toomas Ilves [Reuters has it backward – J.E.], president of Estonia; Ellen Johnson Sirleaf, president of Liberia; and Edi Rama, prime minister of Albania.

Given the prominent role of Estonian intelligence in developing the supposed “Russiagate” case against Trump associates, this has always seemed especially interesting to me.

It gets even more so, considering that the New Jersey-raised Ilves (who took office as president for his first term in 2006) was the Baltic desk man at Radio Free Europe in the late 1980s and early 1990s.  From 1993 to 1996, Ilves was the Estonian ambassador to the United States.

I had a footnote, in yesterday’s post about the “Cohen in Prague” theme, regarding Radio Free Europe/Radio Liberty (RFE/RL) and Soros’ connection to it.  Soros bailed the RFE/RL enterprise out when the U.S. Congress began drawing down funding for it in the post-Cold War money-saving surge of the early-to-mid-1990s.  Soros also took over the RFE/RL media library, which today, as the Open Media Research Institute, puts out news advisories for affiliated journalists and organizations.  (Links and discussion here.)  The RFE/RL headquarters is in Prague.

At the same time he was saving RFE/RL, Soros was building up his first “Open Society” institute, the Open Estonia Foundation, in the Baltic Republic of Estonia.  He had founded it in 1990, the idea for the Open Society Institutes being to foster liberal, “open society” ideas in the states of the former Soviet Union, which for decades included the Baltic Republics.

An early board member of the Open Estonia Foundation was Baron Nils Taube, son of an Estonian father whose family fled to England in the 1940s, after the Soviet Union overran Estonia in World War II.  Taube, known as a “legendary investor” in the London of the late 20th century, was a close friend of Soros for decades, and served on the board of directors of Soros’ Quantum investment fund.  Taube died in 2008, but prior to that was active in post-Soviet Estonian culture and politics, serving in ministerial cabinet roles for research and development and financial investment.

Soros has surprisingly extensive connections in Estonia, which cannot fail to be arresting when Estonia keeps coming up as the source of intelligence on “Russia-Trump” links.

The curious prominence of Prague in the Trump-Russia saga is also worthy of note, given the city’s significance in Soros’ network of foundations and influence projects (including RFE/RL, the initial campus of the Central European University, Soros’ Medianet and the Center for Independent Journalism, and Open Society Fund Prague, which hosts many of Soros’ Europe-wide initiatives).

The oddly dedicated “Russiagate” themes about Prague and Estonia come into focus a little better when you know how varied and deep George Soros’ ties are with both locales.

And that’s one reason why the connection between Kimba Wood and George Soros should not be ignored, when Wood is deciding what happens to Michael Cohen’s attorney-client confidentiality at the same time Robert Mueller’s team is insisting that Cohen was in Prague in 2016, for a meeting with Russians about interfering in the U.S. election.

IG finding: EPA chief Pruitt did NOT sign off on questionable pay raises for staffers
Next Post
There is a machete attack every 90 minutes in ‘gun-free’ Britain