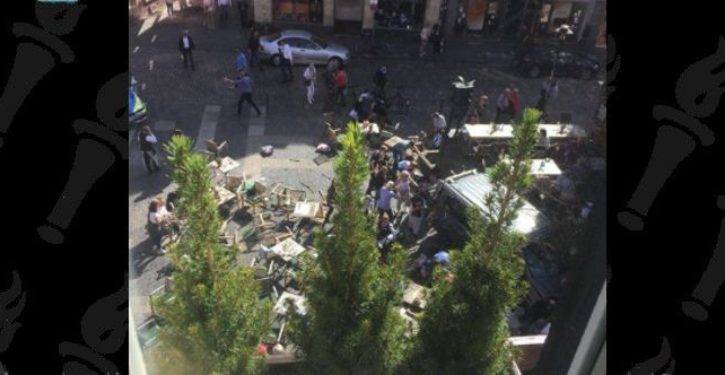 Reports from a variety of sources, including the Associated Press and BBC, indicate that a delivery truck slammed into a crowd Saturday the German city of Muenster. Several people are said to be dead, while dozens more were injured.

The incident appears to have been a deliberate attack. The driver, who was armed, has since shot and killed himself. German security personnel are still not sure whether the incident had connections to terrorism.

The senior security official said that police were conducting response measures as though it were a terrorist attack, but that they remained uncertain about whether it was one. The official spoke on the condition of anonymity to describe the unfolding details of the case.

“There are dead and injured. Please avoid the area,” the North Rhine-Westphalia regional police wrote on their official Twitter account. “We are on site.” The police told people to avoid the city center.

Images of the city center showed a small delivery van that appeared to have hopped onto a sidewalk off the street and plowed through the seats and tables of an outdoor cafe. Chairs were scattered and broken across a small cobblestone plaza.

Vehicles have been used in terrorist attacks across Europe in recent years, including in Germany. In December 2016, a Tunisian man whose asylum request had been rejected crashed a truck through a crowded Christmas market in Berlin, killing 12 and injuring 56.

The incident has some similarities to one in December 2016, when a truck slammed into a crowd at a Christmas market in Berlin, killing 12.