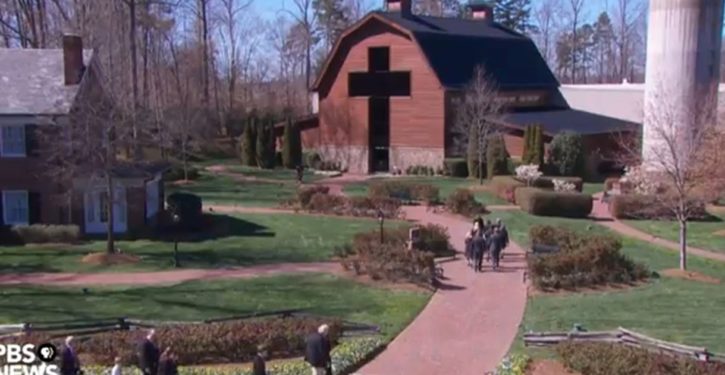 With many Americans, I watched the memorial service for Billy Graham today.  The Reverend Dr. Graham would not have been impressed with the attendance of the august, or the number who showed up or their place of origin (we’re told about 500 of the 2,000 who were there for the service came from around the world).

But he would have cared about every heart present, and its understanding of the power of redemption and forgiveness.

Watching the service, and hearing the simple, direct words of those who spoke, what came to me was how important it is that America get back to our original charter as a nation that is about freedom in faith.

The brightness and cheer of today’s service for Billy Graham were physical emblems of something indispensable to America’s state as a nation and a people.  That something is the authority we have, when we are secure in our faith position, to not hear politicized condemnation, or hatred, guilt, shame, anger, callousness, dismissal, or resentment – not hear them when they aren’t directed at us, and not hear them even when they are.

Many, many people have had to learn through faith to ignore the bad “vibes” coming from others.  By ignore, I don’t mean “fail to take sensible precautions if someone is trying to kill you.”  The authority to ignore means not having to let the anger, resentment, callousness, or intended condemnation coming from others affect your sense of yourself.  You don’t have to let it change your attitude: don’t have to feel bad about yourself, or lose hope for your future, or feel desperately that your only option for shedding the burden of the bad feelings is to strike back.

This economy of psychological destruction has been deeply embedded in most human culture throughout time.  But 300-400 years ago, America was a fresh start for thousands of people escaping the old world’s culture of entrenched, reflexive condemnation, casual guilt-mongering and cruelty, and misdirected resentment.

It was not anti-faith that brought refugees from religious and other forms of persecution here.  It was faith.  The original thousands became millions, many of whom came from persecution in the succeeding centuries, or were displaced by wars and arbitrary state cruelty, which often fell hardest on them because of their religious backgrounds, even if it didn’t involve Inquisitions or burning at the stake.

Some, indeed, were brought over against their will as slaves.  Not all of them, when they got to America, found an open-armed welcome.  But what ultimately mattered was that they found a commitment to freedom in faith.  They could exercise their authority to not hear whatever hostility might be coming from others.

This authority is very real.  It will change your life, if you realize you have it, and stop letting other people load you down with a sense of condemnation, distaste, or victimization.  America was a place where people could exercise that authority, not because the government was taking their side, but because it wasn’t siding against them.

I’ve walked us to this point because the next thing is what we all need to hear.  We are no longer a nation of freedom in faith.  The government sides against us today, presuming to rule on what it says our faith believes, and presuming to rule against it.

Armies of regulators are dedicated now to hearing condemnation, hatred, guilt, shame, anger, callousness, dismissal, and resentment, where they are not intended.

Armies of “specialists” are determined to teach our children to hear condemnation, hatred, guilt, shame, anger, callousness, dismissal, and resentment, where they are not intended.

Armies of theme-mongers across our cultural institutions give their lives to framing all our perceptions in terms of condemnation, hatred, guilt, shame, anger, callousness, dismissal, and resentment, whether they are demanding that we hear those things from others, or telling us that we are guilty of them ourselves.

The whole apparatus of our culture has become dedicated to modeling a lie for us: the lie that we have to seek out and somehow eradicate all condemnation, hatred, guilt, shame, anger, callousness, dismissal, and resentment – coming from others – before we can have a positive, hopeful, optimistic perspective ourselves.

This cultural mindset has taken root so deep in us that we think vigilance against the laundry list of bad-tempered human vibery is a way to live.  We actually call it virtue now.  We let it drive the priorities for our communal life, and too often for our individual lives as well.

This is, without exaggeration, an epic, monumental tragedy of cultural deterioration.  At the top-level organization of society, we don’t just obsess over the bad temper and bad feeling that always, inevitably, are there because humans are imperfect.  We make them up out of thin air to torture ourselves with.  We literally put time and effort now into hearing bad feeling and bad temper when they aren’t there, and then obsessing over them — on the Colin Kaepernick model — as if nothing else can be done until something happens, even though we can’t say what.

There is no finding our way through argument out of this cycle of destruction.  The only way out is to repudiate it directly: frontally, categorically, without caveat.

But the good news is that we can do that.  Freedom in faith is the most powerful mindset and commitment there is.  By it, we are each and all released to exercise our authority: to not dog-paddle desperately tethered to the bad, but live hopefully, taking wings by the good.

The unique character of America, where that was the original core of our charter, has been under relentless assault since the beginning (not least through the insidious deformity of institutionalized slavery).  But I think Billy Graham would remind us that “we wrestle not against flesh and blood [i.e., against other people, whom we so often look for reasons to blame], but against principalities, against powers, against the rulers of the darkness of this world, against spiritual wickedness in high places.” (Ephesians 6:12, KJV)

People, and their governments, will be blessed, who remember that we have something better than the “right” – we have the authority to live in these truths.  Governments, cultures, leaders of society who interfere with that authority are out of bounds.  They will not prosper, and we need not fear to walk in sunlight and peace, without reference to their political economy of accusation and blame.  America was uniquely empowered by being founded for the express purpose of knowing that, and living it out.  She can be again.