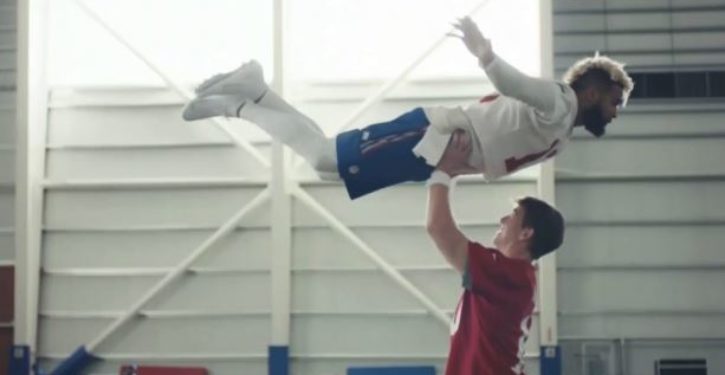 It is the day after the Super Bowl, which means it is time to decide the best and worst commercial of the evening.

Almost everyone who watched the game, or at least the commercials, is in agreement that the best ad hands-down was the one in which New York Giants Eli Manning and Odell Beckham acted out the final dance scene from the movie “Dirty Dancing.”

If there is one criticism of the ad — and this is often true of these multimillion-dollar gambles on the part of advertisers and their clients — is that no one today seems to be able to remember what product or service the spot was promoting. (The answer, it turns out, was the NFL.)

For thirty teams, Super Bowl isn’t the end of the season – it’s the start of next season. Watch Eli, @OBJ_3, @TheHumble_21 and the @Giants O-line put in the work in our #SBLII commercial. pic.twitter.com/QP6UducMYa

Which ad was the worst? The one run by T-Mobile that featured the voice of actress Kerry Washington advocating for equal pay, gay marriage, DACA, and just about any other liberal flash point of the day you can think of while the camera panned over babies of various ethnicities.

The ad, titled “#LittleOnes,” begins by showing footage of babies of different races on a bed while soothing music plays in the background. “Welcome to the world little ones,” Washington says. “It’s a lot to take in, but you come with open minds and the instinct that we are equal.”

“Some people may see differences and be threatened by them, but you are unstoppable. You’ll love who you want. You’ll demand fair and equal pay. You will not allow where you come from to dictate where you’re going,” the ad continues.

“You will be heard, not dismissed. You will be connected, not alone. Change starts now,” the ad states, asking, “are you with us?”

T-Mobile’s website also advertises its new campaign, which focuses on diversity and equality.

T-Mobile advertises itself as America’s best unlimited network against competitors like Verizon and AT&T.

We can battle climate change without Washington. Here’s how
Next Post
Tweet of the Day: Why do Republicans and @realDonaldTrump hate cops?