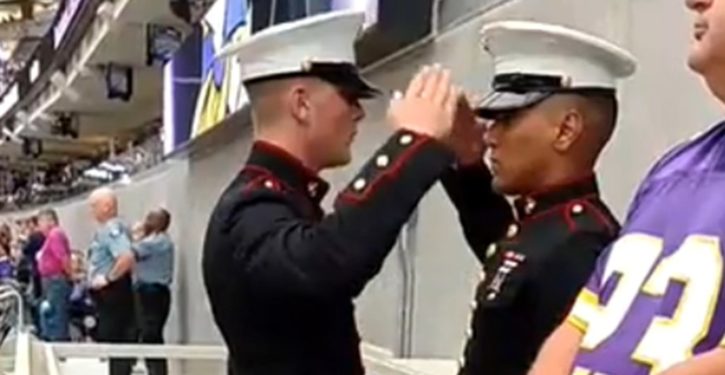 We here at Liberty Unyielding haven’t spared the NFL or the team owners in criticizing the ugly trend of political protests against police and American society during pro football games.  Their response to player “protests” has too often been feckless and unimpressive.

But a viral video shows how one team is bucking the trend, and honoring POWs and MIA veterans at every game.

The team’s season ended on Sunday when the Minnesota Vikings lost to the Philadelphia Eagles in the NFC championship game.  However, since the Super Bowl will be played at the Vikings’ U.S. Bank Stadium in Minneapolis, the team and the stadium have one more opportunity this season to render their respect to America’s missing.

Conservative Tribune picked up on the video, and the ritual at Vikings games, on Monday.

“For every Vikings game, one unfilled seat permanently covered in black and located in section V8 is guarded by current military members,” explained Vikings.com when the team unveiled the tribute in 2016.

“Decorated with the POW/MIA logo and set in front of the seals of the five branches of the United States Military, the seat honors military personnel missing and unaccounted-for from all conflicts, including the 1,618 from the Vietnam War.”

The seat is meant as a permanent place of honor for service members who have been lost during times of war.

The honor guard rotates among the services.

For the ones who haven’t come home: We will never forget.

Internet rallies with fund, job offers for disabled vet driven from job by SJWs
Next Post
The incredible timeline of the FBI, DOJ, Democrats, and Hillary in mid-2016