First the “glass houses” portion of today’s program, which stars Sen. Dick Durbin (D-Ill.), who has decided that the term chain migration is racist despite having used the words himself at last Tuesday’s bipartisan White House meeting on immigration.

During the meeting, Durbin said:

We have a deadline looming and a lot of lives hanging. We can agree on some very fundamental and important things together on border security, on chain, on the future of diversity visas. Comprehensive, though, I worked on it for six months with Michael Bennet, and a number of — Bob Menendez, and Schumer, and McCain, and Jeff Flake — and it took us six months to put it together.  We don’t have six months for the DACA bill. [Emphasis added]

That was Tuesday. By Friday, Durbin had concluded that the term was toxic, telling reporters with MSNBC (beginning at 1:39 in the video below):

When it came to the issue of ‘chain migration,’ I said to POTUS, do you realize how painful that term is to so many people? African-Americans believe that they migrated to America in chains. And when you speak about ‘chain migration,’ it hurts them personally.

BREAKING: Democrat Sen. Durbin, who was in meeting with Pres. Trump: “He said these hate-filled things.” https://t.co/yUHQuZIOCm pic.twitter.com/s9fMhtcguR

One wonders whether Durbin conjured up this bit of dog whistle nonsense on his own or whether he was taking a cue from an oversensitive black colleague who was offended. Either way, if chain migration carries the odious connotation Durbin claims it does, shouldn’t he be in favor of abolishing the practice, which assures phasing out the offensive term?

While media said ‘sh**hole’ over and over, Trump altered policy on Iran, Hezbollah
Next Post
Cartoon of the Day: Trump’s yuge nuke button 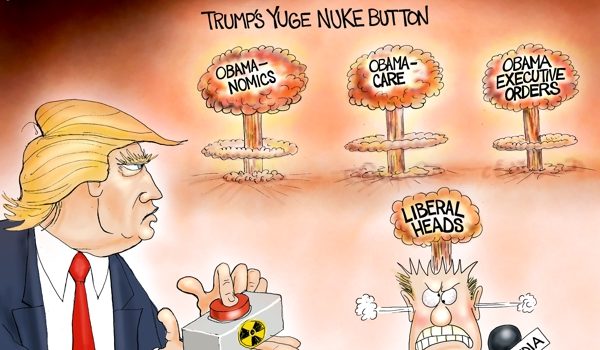