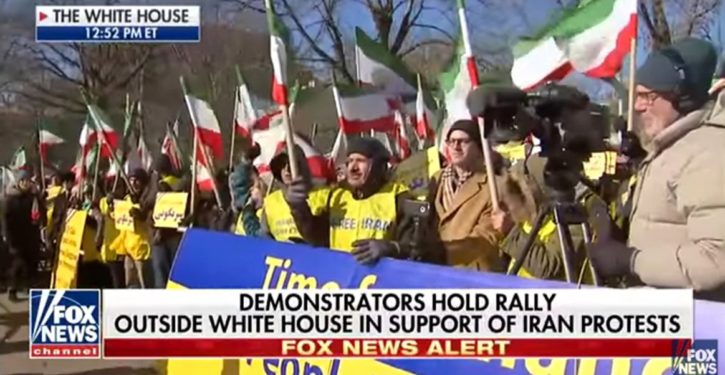 Sympathizers brave the cold to rally in support of the Iran protests outside the White House on 7 Jan 2018. (Image: Screen grab of Fox News video, YouTube)

First, global warming was linked to the Syrian civil war, then the rise of the Islamic State, then the UK’s “Brexit” vote, and now some experts say man-made climate change played a “massive” role in ongoing Iranian protests.

Iran has been hit with a wave of protests in recent weeks, resulting in more than 1,000 arrests and 20 deaths. While protesters vent their frustration with rising egg prices and economic stagnation, some scholars say man-made global warming is the real culprit.

“You have climate change, shortage of water, they can’t grow their crops, and now they’re getting their cash handouts taken away,” Amir Handjani, a senior fellow at the Atlantic Council’s South Asia Center, told E&E News.

“Iran has had a drought for 14 years, and many of these people who come into these provincial cities and towns are there because they could not function as farmers anymore; there was no water for their farms,” Barbara Slavin, who directs the Atlantic Council’s Future of Iran Initiative, told E&E News.

It’s nearly identical to the argument some experts made in connecting global warming to the Syrian civil war — a long drought forced people into cities and sparked revolts amid government mismanagement.

Former Vice President Al Gore took it one step further and claimed global warming contributed to the “Brexit” vote in 2016 where a majority of Britons voted to exit the European Union.

These theories, however, are just that, and are not widely accepted by national defense experts of climate scientists. Politics and underlying human relations are the real catalysts of conflict, other experts say.

“Cooperation is far more likely in difficult conditions, those that have been exacerbated by climate changes and those that are highly vulnerable to climate change,” Clionadh Raleigh, a professor at the University of Sussex, said in a 2016 lecture.

“But cooperation doesn’t make headline news,” Raleigh said, “so we rarely hear about it and instead wars, such as those in Syria, are connected to climatic changes that have been going on for decades within those areas.”

Slavin said global warming’s impact on current unrest is “massive” and underreported by the media, though one of the experts E&E News interviewed said environmental issues only brought “some” protesters into the streets. Iran is party to the Paris climate accord.

This summer has been a scorcher for Iran, with temperatures hitting 129 degrees Fahrenheit — one of the hottest ever recorded in the world. Government planners have also poorly handled water access problems, building dams that restricted access to rural areas and small cities.

Climate models suggest Iranian droughts and high temperatures could be much more common in the future, but those impacts aren’t projected to happen until the late 21st Century.

Iran, like most of the Middle East, is drought-prone and has a long history of lengthy droughts. Some scholars have connected these past natural droughts to the fall of empires, including the Akkadian Empire some 4,200 years ago.

Another study claimed the current spat of droughts across the Middle East could be related to fluctuating “solar insolation” across Europe. That study said the Middle East shouldn’t expect serious drought relief for another 10,000 years.

Even E&E News noted the current riots were sparked by “rising egg prices and anger over planned cuts to subsidies,” the outlet reported. 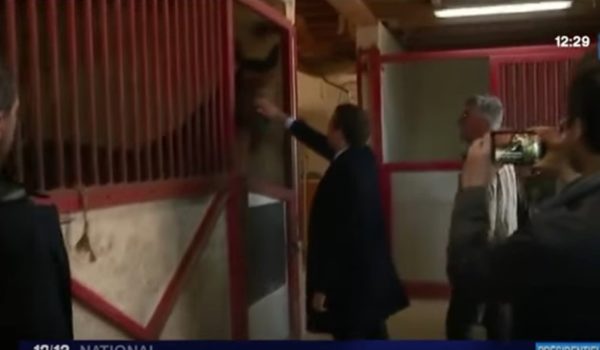