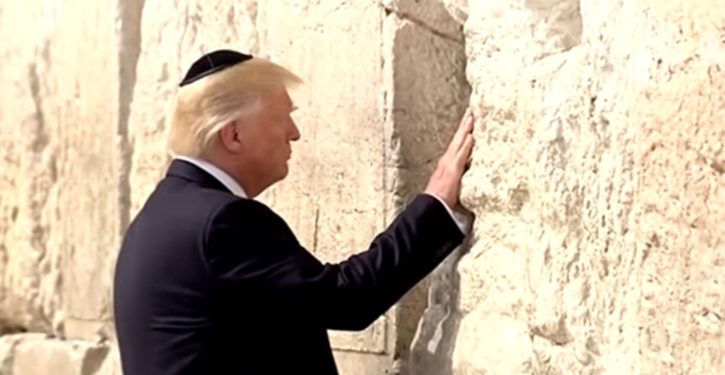 Trump's presidential visit to the Western Wall in May 2017. (Image: Screen grab of WaPo video, YouTube)

Not all of the news outlets are reporting this as a done deal, but the Jerusalem Post is.

A train station that will be built next to the Western Wall will be named after US President Donald Trump.

The decision was made by Transportation Minister Israel Katz, who said: “The Western Wall is the holiest place for the Jewish people, and I decided to name the train station that leads to it after president Trump – following his historic and brave decision to recognize Jerusalem as the capital of the State of Israel.”

Commentary is focusing, understandably, on the basic fact of Trump’s recognition of Jerusalem as Israel’s capital.

But JPost positions a related article with its piece on the new train station, which sheds light on the choice of this particular station.

The article from 15 December quotes a “top Trump official” on the status of the Western Wall in Jerusalem’s Old City; i.e., the Western Wall of the “Second Temple,” mostly destroyed by the Romans in A.D. 70, where Jews pray night and day.  Although the U.S. position is that the boundaries of Jerusalem as Israel’s capital are to be negotiated between Israel and the Palestinian Arabs, the top Trump official made a noteworthy affirmation earlier this month:

The Trump administration “cannot envision a scenario” under which the Western Wall, “would not be part of Israel” in a future peace agreement with the Palestinians, a senior official said on Friday.

The official underscored the point in a briefing with reporters in advance of this week’s visit to Israel by US Vice President Mike Pence. …

“We cannot envision any situation under which the Western Wall would not be part of Israel,” the official said.

“But as the president said, the specific boundaries of sovereignty of Israel are going to be part of the final-status agreement.”

This may seem like a minor point.  But in specifically addressing the Western Wall this way, the Trump administration clarified its perspective that Israel has a unique, historical claim to it.  That is simply a reflection of reality, to be sure, but adopting that perspective means recognizing something that Palestinian Arab themes have been trying to erase for the last 30-40 years: evidence of Jews’ longstanding connection to the territory of Israel and the holy places of Jerusalem.

In concrete terms, the recognitions communicated by the Trump administration mean Israel does not have to negotiate from a precarious position, in which the nation’s presence anywhere – especially in and around Jerusalem – can be claimed to be a “hostile occupation,” and thus an impediment to peace.

Even without such a formal recognition by a U.S. president, Israel has offered a two-state agreement to the Palestinian Arabs on multiple occasions since Israeli statehood in 1948.  As with offers by the UK in 1937 and the UN in 1947, the Arabs have rejected each one of those offers.  (See here, here, here, and here.)

There is no new information in Mahmoud Abbas’s announced rejection of new talks after the Trump declaration.  Rejecting peace deals and talks is what he always does, requiring further enticements to be lured back to them.  It’s a tactical process for him.

But this time, he won’t have the option of extorting Israel or the U.S. by leveraging imprecise, historically inaccurate verbiage about “occupation.”  Trump has obviated that line of effort by affirming the Israeli claim to both Jerusalem and the Western Wall.

These affirmations level the playing field to where it ought to be.  It’s a playing field founded now on truth, not recently concocted lies, endlessly expanded on the margins.*

Neither side in the negotiations has an inappropriate advantage, with its historical claims being given undue preeminence.  Let the truth, and the attitudes and priorities of today, decide.

This is why Trump’s Jerusalem policy is such a big deal for Israel.  It is affirmative evidence of the U.S. position that Israel is not negotiating from a posture of prior disadvantage or indictment, but is equally entitled to both make concessions, and require them.

For the last 50 years, that U.S. perspective has had to be derived analytically from the history of our diplomatic statements – some of them carefully elliptical or even defensively negative.  No more.  Whatever you think of Trump (and I have continuing differences with him), he has made policy as it should be made, in a focused and affirmative manner.  No wonder the Israelis want to name this particular new train station after him.

* E.g., that Mary and Joseph, the parents of Jesus, were “Palestinian refugees” when they made their way to Bethlehem (and related variants).  Besides the fact that there was nothing called “Palestine” at the time – and indeed, there has never been a nation of “Palestine” – the record we have of Joseph is that he was a Jew of the tribe of Judah, who was going to register with Roman overlords in his tribal province of Judea, but was a resident of Nazareth in the province of Galilee.

These details conform with how Roman and local Jewish contemporary chroniclers labeled the localities and demographic identities involved – unlike the false themes recently undertaken by the Palestinian Arabs. 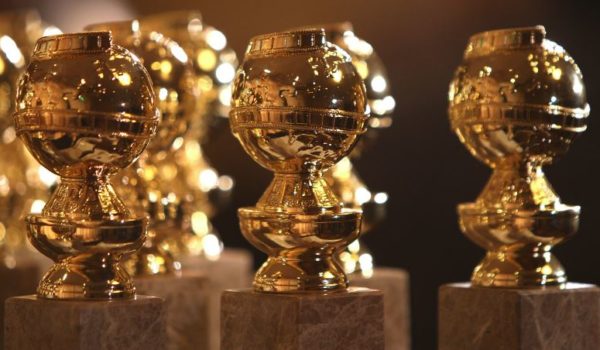