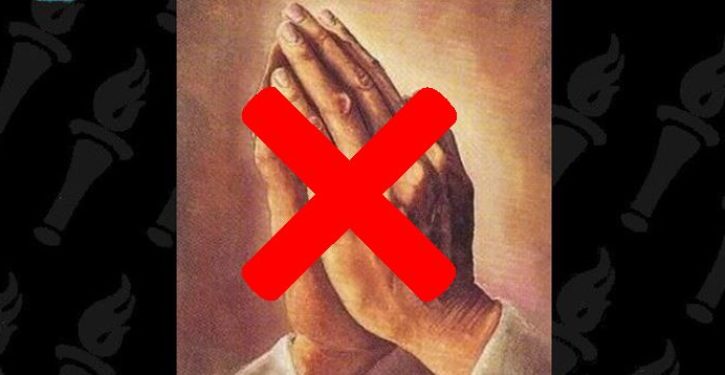 As the NFL standoff between players and fans over respecting the national anthem heads into Week 9, a whole new kerfuffle has arisen at over the pre-game habits of at least one team in a Georgia community. This time, cultural Maxism is the driver.

Friday night the East Coweta High School football team took on Newnan High. But before the game, all eyes were on the coaches and players.

Immediately after running on to the field, the East Coweta players stood shoulder to shoulder, bowed their heads and prayed. It’s something they’ve done many times before, but this time was different. This time the rules had changed. There were no coaches allowed.

The article goes on to note that the redoubtable Freedom From Religion Foundation was behind the rule change. In October, the non-profit the school that it’s illegal for public school employees to join students in prayer.

This sounds like a matter for the courts to decide, and judging from the reaction of some parents of players, that is where it seems likely to end up.

As for the so-called Freedom From Religion Foundation, the group’s opposition to religion doesn’t pertain to all “faiths.” In March 26, the group advocated on behalf of distributing both atheist and satanic literature to students at a high school in Colorado.