Regular readers of this blog are familiar with the instructional videos by Prager University that have run from time to time in this section. Especially alert readers will have noticed that the last such post to appear ran in July. It was around this time that Google and YouTube began censoring the videos, which take a conservative posture on issues of the day.

Now the company is suing the social media giants in the U.S. District Court for the Northern District of California for discriminating against its right to free speech. From Prager:

The lawsuit cites more than 50 PragerU videos which have either been “restricted” or “demonetized” by Google/YouTube. The PragerU videos range on various subjects presenting a conservative point of view, and include a video by noted Harvard Law professor Alan Dershowitz on the founding of Israel. PragerU previously compiled a complete list of their restricted videos here, which includes: “Why America Must Lead,” “The Ten Commandments: Do Not Murder,” “Why Did America Fight the Korean War,” and “The World’s Most Persecuted Minority: Christians.”

In correspondence cited in the filing, Google/YouTube made it clear that the censorship of certain videos was because they were deemed “inappropriate” for younger audiences.

“Watch any one of our videos and you’ll immediately realize that Google/YouTube censorship is entirely ideologically driven. For the record, our videos are presented by some of the finest minds in the Western world, including four Pulitzer Prize winners, former prime ministers, and professors from the most prestigious universities in America,” stated PragerU founder Dennis Prager.

Prager added, “They are engaging in an arbitrary and capricious use of their ‘restricted mode’ and ‘demonetization’ to restrict non-left political thought. Their censorship is profoundly damaging because Google and YouTube own and control the largest forum for public participation in video-based speech in not only California, but the United States, and the world.”

The total number of people who currently use YouTube exceeds 1.3 billion people. Google and YouTube advertise YouTube to the public as a forum intended to defend and protect free speech where members of the general public may express and exchange their ideas. They have represented that their platforms and services are intended to effectuate the exercise of free speech among the public. According to Google and YouTube: “voices matter.” YouTube states that it is “committed to fostering a community where everyone’s voice can be heard.”

“However,” said Eric George of Browne George Ross, the firm representing PragerU, “Google and YouTube use restricted mode filtering not to protect younger or sensitive viewers from ‘inappropriate’ video content, but as a political gag mechanism to silence PragerU. Google and YouTube do this not because they have identified video content that violates their guidelines or is otherwise inappropriate for younger viewers, but because PragerU is a conservative nonprofit organization that is associated with and espouses the views of leading conservative speakers and scholars.”

“This is speech discrimination plain and simple, censorship based entirely on unspecified ideological objection to the message or on the perceived identity and political viewpoint of the speaker,” said former California Governor Pete Wilson of Browne George Ross. “Google and YouTube’s use of restricted mode filtering to silence PragerU violates its fundamental First Amendment rights under both the California and United States Constitutions. It constitutes unlawful discrimination under California law, is a misleading and unfair business practice, and breaches the warranty of good faith and fair dealing implied in Google and YouTube’s own Terms of Use and ‘Community Guidelines.’”

“There is absolutely nothing ‘inappropriate’ about the content of the PragerU videos censored by Google and YouTube; the videos do not contain any profanity, nudity or otherwise inappropriate ‘mature’ content and they fully comply with the letter of YouTube’s Terms of Use and Community Guidelines,” said Marissa Streit, PragerU’s chief executive officer who has engaged in a year-long-effort to try and persuade Google to stop censoring PragerU content. Streit continues, “It’s clear that someone doesn’t like what we teach and so they intend on stopping us from teaching it. Can you imagine what the world would look like if Google is allowed to continue to arbitrarily censor ideas they simply don’t agree with?”

“This is not a left/right issue. It is a free speech issue, which is why prominent liberals, such as Harvard law professor Alan Dershowitz, are supporting our lawsuit,” Prager concluded. 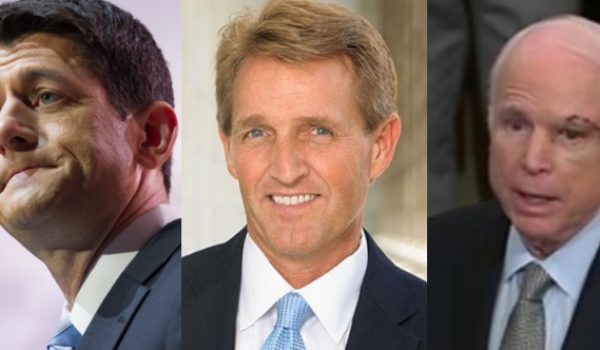 BREAKING: Arizona’s Jeff Flake announces he will not seek re-election to U.S. Senate
Next Post
Kaepernick gets $1 million book deal