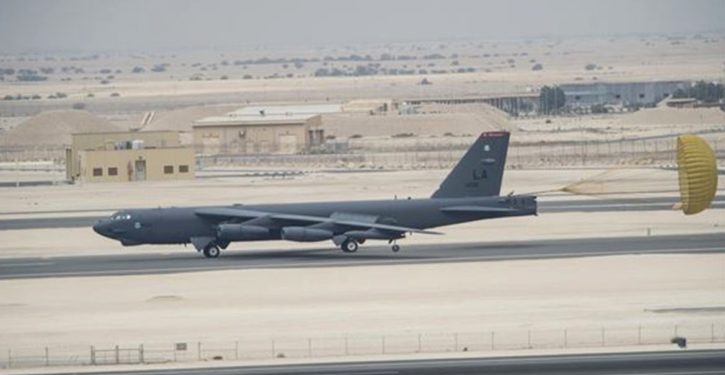 The U.S. Air Force is preparing to put America’s strategic nuclear bombers on 24-hour alert to counter emerging threats, according to an exclusive report.

Preparations are reportedly underway at Barksdale Air Force Base, the headquarters for Global Strike Command, to have nuclear-armed multiple B-52 bombers ready to deliver a crushing blow at a moment’s notice, Defense One revealed. A 24-hour alert status for America’s nuclear bombers has not been seen since the end of the Cold War in 1991.

Neither General John Hyten, head of U.S. Strategic Command, or General Lori Robinson, head of U.S. Northern Command, has ordered the shift, but steps are being taken in expectation of such an order.

New equipment is being brought in to facilitate a larger force, and facilities are also being constructed for other elements of America’s nuclear arsenal, such as nuclear cruise missiles currently under development.

“The world is a dangerous place and we’ve got folks that are talking openly about use of nuclear weapons,” General David Goldfein, Air Force chief of staff, said in an interview during his tour of Barksdale and other related bases, according to Defense One.

“It’s no longer a bipolar world where it’s just us and the Soviet Union. We’ve got other players out there who have nuclear capability. It’s never been more important to make sure that we get this mission right,” he added.

The prevailing nuclear threat at the moment is North Korea, a rogue regime that has twice successfully tested an intercontinental ballistic missile able to strike parts, if not most, of the continental U.S. and a thermonuclear warhead capable of producing an explosive yield potentially in excess of 300 kilotons. More alarming is that the North often threatens to use its growing nuclear weapons stockpile against the U.S.

There is also the threat China and Russia pose, and at some point further down the road, perhaps Iran.

The bases associated with America’s airborne strategic nuclear deterrent capabilities are expected to receive visits from E-4B Nightwatch and E-6B Mercury aircraft, which would serve as flying nuclear command centers in a conflict.

“Our job is options,” Goldfein said, “We provide best military advice and options for the commander and chief and the secretary of defense. Should the STRATCOM commander require or the NORTHCOM commander require us to [be on] a higher state of readiness to defend the homeland, then we have to have a place to put those forces.”

One of the new paintings at one of the upgraded facilities reportedly shows a B-52 bomber and is accompanied by the words: “Peace The Old Fashioned Way.”