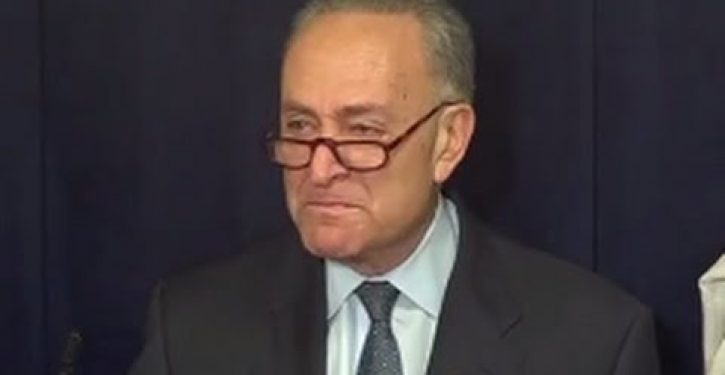 In the age of President Donald Trump, there are a few propositions that unite the establishment and progressive wings of the Democratic Party.

One of them is that lots of immigration — legal and illegal — is good for America.

To justify high levels of immigration, prominent Democratic lawmakers such as New York Sen. Chuck Schumer and Illinois Rep. Luis Gutierrez make emotional appeals to America’s history as a destination for immigrants. But there is a colder political calculus at work, as well.

As independent public policy analyst Jason Richwine argued in an Oct. 3 articlefor National Review, Democrats’ enthusiasm for mass immigration comes in part from an understanding of voting behavior that has eluded their Republican counterparts: immigrants overwhelmingly and consistently support the Democratic Party.

About two-thirds of all foreign-born voters backed former Secretary of State Hillary Clinton in the 2016 presidential election, and Asian and Hispanic Americans — immigrant and native-born — together accounted for 20 percent of Clinton’s total votes. Like black voters, Asians and Hispanics have become reliable voting blocs within the Democratic coalition.

Some Republican strategists argue that immigrants have rejected the party due to its supposed embrace of xenophobia under Trump’s malign influence. As evidence, they offer the example of immigrant-friendly former President George W. Bush, who won 40 percent of the Hispanic vote in his 2004 presidential re-election.

But Bush’s success with Latino voters is something of an anomaly for Republican candidates, stretching back to Ronald Reagan’s first term. Neither John McCain nor Mitt Romney, both moderate Republicans who favored comprehensive immigration reform, came close to matching Bush’s share of the Hispanic vote in their failed bids against former President Barack Obama.

McCain won just 31 percent of Latino voters in 2008, according to the Pew Research Center. Romney did even worse in 2012, winning only 27 percent — slightly worse than Trump’s 28 percent last year.

Even Ronald Reagan, a broadly popular Republican president, never cracked 40 percent support among Hispanic voters. He won 35 percent of Latino voters in 1980, and then 37 percent in his 1984 landslide victory.

Interestingly, Reagan’s signing of a 1986 amnesty bill giving legal status to millions of mostly Hispanic illegal immigrants did nothing to help his Republican successor, former President George H.W. Bush, capture a bigger share of the Latino vote. H.W. Bush, nobody’s idea of an immigration hawk, took home 30 percent in 1988 and then just 25 percent in 1992.

All of these vote shares confirm a clear, persistent preference among Hispanic voters for the Democratic Party. In the last 10 presidential contests, only George W. Bush in 2004 managed to narrow the two-party gap to less than 20 points.

Richwine argues this partisan preference stems from the basic fact that Hispanic immigrants and their children don’t very much care for the social and fiscal conservatism that has historically informed the Republican Party platform. Contrary to claims by some Republican lawmakers and strategists that Latinos are “natural conservatives,” surveys show that Hispanic voters are no more likely than non-Hispanic whites to describe their political views as conservative.

In fact, as Pew discovered in a 2012 voter values survey, Hispanic Americans show a clear preference for “a bigger government providing more services.” More than 80 percent of Hispanic immigrants said they preferred a bigger, more active government, compared to just 19 percent who backed a smaller role for the government. That gap was narrower for subsequent generations, but 72 percent of second-generation and 58 percent of third-generation Latinos still leaned toward bigger government.

When it comes to pro-life attitudes, it is true that about six in ten Hispanic immigrants believe abortion should be illegal. But those anti-abortion views subside considerably among later generations of Hispanic Americans: Just 43 percent of third-generation Hispanics think abortion should be against the law. And, as University of Alabama political scientist George Hawley notes, there is scant evidence that Latinos consider abortion policy to be a key factor in their voting preferences.

These policy preferences hold true for Asian Americans, as well. Compared with the general public, Asians are more likely to support an activist government and less likely to identify as Republicans — just 28 percent identify with or lean toward the GOP, according to Pew.

When broken down by issue, Asian Americans’ distaste for social and fiscal conservatism is apparent — 55 percent prefer a big government that provides more services over a smaller government than provides fewer services, 53 percent say homosexuality should be accepted by society and not discouraged, and 54 percent say abortion should be legal in all or most cases.

Even through immigration from Asian and Latin American countries has added millions of voters to the Democratic coalition, Republicans have been able to hold on to power because working-class white voters have themselves migrated en masse to the GOP. As a larger share of the voting public becomes Asian and Hispanic, however, overall support for conservative policies is likely to wane.

As Richwine notes, Republicans who join their Democratic counterparts in pushing for high levels of immigration do so at their own political peril.

“In the end, the optimism about immigrants becoming small-government and traditional-values voters is just that — optimism, not a justified confidence that importing voters who prefer Democrats will have a benign effect on conservatism,” he wrote.