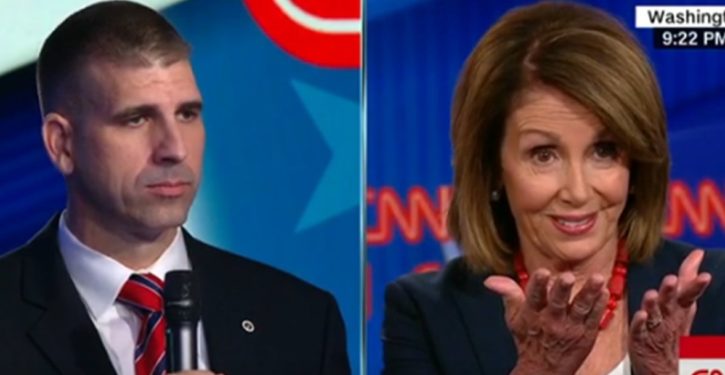 On Wednesday, CNN gave House Minority Leader Nancy Pelosi, D-Calif., an hour to promote her gun control ideas with a town hall event.  One of those who participated was Dan Hinkson, a retired U.S. Marine Captain and gun store owner in Virginia.

“You know, this is very difficult for me, you know, as a retired Marine, to see these kinds of travesties happening in my country. And then on the flip side of that, as someone who is in the firearms industry, who caters to clients who support the Second Amendment and are trying to acquire firearms for their own personal protection, you know, it’s very difficult,” he said, according to a transcript at CNN. “And my condolences go out to those who have been injured and killed and their families.

“My question is, given the totality of the events surrounding this latest incident, you know, we have potentially a lone wolf shooter, although that’s being questioned now, I think, for very good reason, you know, someone who’s a multi-millionaire…spent thousands upon thousands of dollars to acquire his means of destruction, you know, legally, from all — everything that we can see. You know, someone with that kind of motivation, what new law can we put out there that would stop something like this?” he asked.

Q: What new law would stop something like this?
Pelosi: Background checks. #PelosiTownHall https://t.co/mrhwApq8qp https://t.co/1rziEQfXAK

“We had come together in a bipartisan way to put together what we thought would save the most lives, and that is to have background checks, gun violence prevention, background checks, and to have them be effective,” Pelosi said after thanking Hinkson for his service and his question.

“I believe that when the surveys are taken about this, Dan, overwhelmingly members of the National Rifle Association support background checks. Gun-owners, the chairman — the person who’s the head of our task force, Mike Thompson, Congressman Mike Thompson of California, he is a Vietnam vet, wounded in Vietnam, a gun owner, hunter. We all support the right of the Second Amendment right to bear arms,” she added.

“So it isn’t a question of that. It is a question of saying, the people that you sell guns to I’m sure would not object to having a background check.”

Pelosi apparently didn’t know what to say, responding with, “Hmm?”

“They all get checked,” he said.

The exchange can be seen starting at about the 5:45 mark in the video below:

A report at NBC News, however, says Stephen Paddock, the man who fired on a concert in Las Vegas, killing over 50 people and wounding more than 500 others, passed background checks and there was nothing to indicate there was a problem:

It was unknown if the weapons Paddock bought from the gun shops, New Frontier Armory in North Las Vegas and Guns and Guitars in Mesquite, were used in the casino massacre.

Police said they found 19 firearms, along with explosives and thousands of bullets, at Paddock’s home in Mesquite. Another 23 guns were found in his hotel room, officials said.

Twitchy said Pelosi “could have talked about ‘bump stocks,’ however, and at least sounded like she knew what she was talking about…” but perhaps “omitted this on purpose” because it was Barack Obama’s ATF that approved them to begin with.

“Oh, Pelosi… you really are an idiot, aren’t you?” said a post at Chicks on the Right.