When we left our story yesterday, the Trump administration had signaled, through anonymous disclosures, that it intended to decertify Iran’s compliance with the 2015 “nuclear deal.”

This move, based partly on a complaint from IAEA Chief Yukio Amano that he had no means of or authority to monitor Iran’s progress with developing a nuclear warhead, would at a minimum force renegotiation of the JCPOA.  (Renegotiation is the policy I have urged in previous posts on this topic.  We shouldn’t fear the collapse of the “deal,” if it comes to that.  But the place to start is forcing negotiations back open on the terms of the existing JCPOA.)

Then, Thursday night, after a White House dinner with his top military staff, Trump made a few cryptic comments of his own about Iran.

The US president said on Thursday evening that Iran had not lived up to the spirit of the nuclear deal.  “We must not allow Iran … to obtain nuclear weapons,” Mr Trump said during a meeting with military leaders at the White House.

“The Iranian regime supports terrorism and exports violence, bloodshed and chaos across the Middle East. That is why we must put an end to Iran’s continued aggression and nuclear ambitions.”

Asked about whether he would “decertify” the deal, he said: “You’ll be hearing about Iran very shortly.”

The president’s major foreign policy speech on Iran will reportedly occur on 12 October.  In the meantime, however, Iran has suddenly indicated an unprecedented willingness to negotiate her contentious ballistic missile program.

Heretofore, Tehran has refused categorically to entertain tightening the unsatisfactory vagueness of UN resolution 2231 (which implemented the JCPOA) on the matter of Iran’s missile program.  Unlike an earlier resolution, 1929 (adopted in 2010), 2231 does not “prohibit” Iran from developing ballistic missiles capable of delivering nuclear payloads; rather, it “calls upon” Iran to not undertake ballistic missile activity related to delivering nuclear weapons.

Iran is called upon not to undertake any activity related to ballistic missiles designed to be capable of delivering nuclear weapons, including launches using such ballistic missile technology, until the date eight years after the JCPOA Adoption Day or until the date on which the IAEA submits a report confirming the Broader Conclusion, whichever is earlier.

In conducting numerous tests of intermediate-range, nuclear-capable missiles since July 2015, Iran has basically been daring the UN and the parties to the JCPOA to do something about it.

Now that Trump looks prepared to call Iran’s bluff, the mullahs are suddenly ready to negotiate the missile program.

We should neither overestimate nor underestimate the import of this.  In offering to negotiate on missiles, Iran has picked the field of dispute in which she has the most advantage.  Remember that there are three elements of a nuclear weapons program: fissile material (the enriched uranium Iran has been perfecting a process for); the delivery vehicle (e.g., missiles); and a warhead.  The enriched uranium is the most-monitored element of Iran’s program (although there remain problems with both monitoring criteria and verification of compliance).  It’s the other two elements for which the terms of the JCPOA are woefully inadequate.

Mr. Amano’s complaint about his inability to monitor warhead activities became the most indisputable reason to date for President Trump to decertify the deal and renegotiate it.  But it looks like Iran hopes to head that off at the pass by putting the missile program on the table – or at least making it the centerpiece of new negotiations.

That’s because the pretexts and methods for monitoring a missile program are inherently vaguer and more hair-splittable than they are for monitoring warhead development.  The latter is an either-or phenomenon.  There’s a lot more dual-purpose ambiguity and wiggle room for bargaining in the missile program.

For that matter, Iran can make concessions on monitoring – e.g., letting international experts visit missile-related sites – without revealing more than she wants to.  Tehran can potentially make a good show of expanded cooperation, as it has done with the uranium enrichment process, but yet keep the really important warhead-development activities fenced off from outside inspection.

Iran will no doubt argue for continued certification from Trump while the missile program is being discussed.  Trump needs to just say no.  The time to put Iran on defense is now.  The mullahs can’t be allowed to keep stringing their negotiating partners along in order to be ready for a nuclear breakout when the Ayatollah chooses.

This immediate counter from Iran is where the rubber meets the road.  For all his unique, startling qualities, it’s probably also where Trump the deal-maker will shine, in not being caught flat-footed.

The offer to negotiate on ballistic missiles is a good sign, but it’s not the answer to the question whether Trump should decertify Iran on 15 October.  As long as we can’t verify that Iran truly has no open path to a bomb – and there are a lot of factors that play into that, not all of them in Iran – the answer to the decertification question is yes.

Why I carry a loaded gun every day
Next Post
Retired Marine captain asks Pelosi question on gun control; her answer says it all 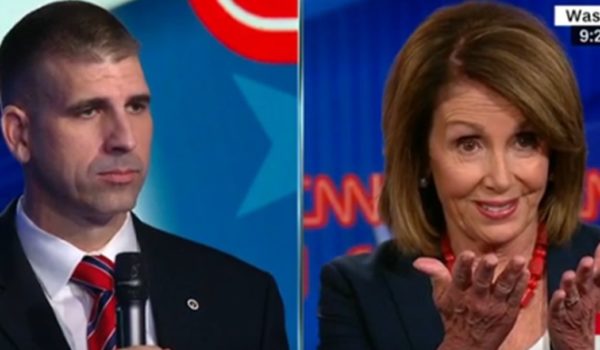