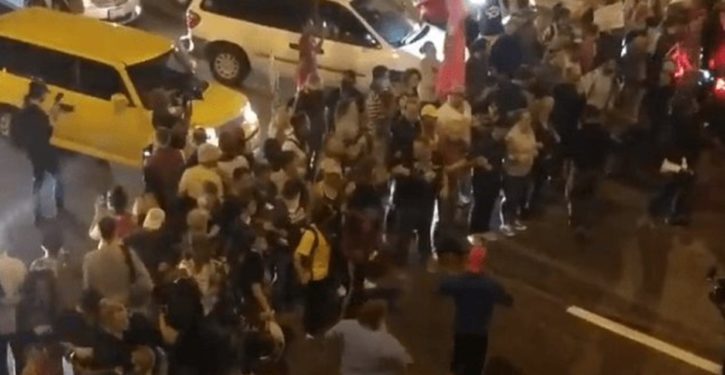 While police did not release the number of people arrested, a city alderman told reporters that at least 126 had been taken into custody, the St. Louis Post-Dispatch reported. Police warned drivers of the protest at 7:40 p.m. CDT and had cleared the freeway of protesters soon after 8 p.m. Police corralled the group off the road, ordered them to the ground and began systematically handcuffing them and putting them in vans for transport.

Bruce Franks Jr., a Missouri state congressman who has participated in several protests, seems to have been among those arrested.

We getting locked up!

The incident was the second mass arrest since the Sept. 15 acquittal of former officer James Stockley in the 2011 shooting death of Anthony Lamar Clark. Police arrested 130 protesters in a Sept. 17 “kettling” operation, an action that prompted misconduct lawsuits from the ACLU and others.

Steven Hoffman, a legal observer for the National Lawyers Guild who was there to monitor police behavior, said police didn’t use chemical agents while making arrests, according to the Post-Dispatch. The detail is crucial as the ACLU’s earlier lawsuit centers on police misusing chemicals like pepper spray during the previous mass arrest.

No retaliatory lawsuits have yet been filed in the wake of Tuesday night’s arrests.

This report, by Anders Hagstrom, was cross-posted by arrangement with the Daily Caller News Foundation.