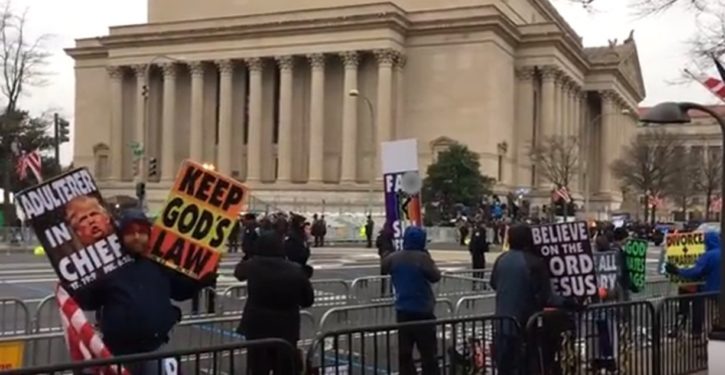 Ordinarily I would bypass something like this, for one thing because Howard Portnoy does it better.

But this one is laugh-out-loud funny, and we could all use a laugh at this point.  It’s Friday.

It looks like the NFL players kneeling for the national anthem to protest [fill in your problem of choice in America] have found a soulmate.  NFL fans may be defecting in droves, and the league may be facing its toughest PR challenge to date, with the potential for its flagging advertising power to decline further.  But there’s at least one stalwart ally in the players’ project of taking a knee against America’s national symbols.

The self-styled Westboro “Baptist” “Church,” for which the expression “scare quotes” could not be more exactly descriptive, has weighed in in solidarity with the NFL players.

These are the people – all dozen or so of them – who maraud about the countryside cruelly harassing mourners at the funerals of fallen military members and gay people.  Their message: God visited death on the deceased because of America’s sins.  Their best-known handheld-sign reads “God hates f**s.”  (Which, for the record, doesn’t seem to me like what Jesus would do, but I digress.)

They like a rousing “God hates America” theme quite as well, however.  And apparently, as far as Fred Phelps and his strange, pathetic congregation are concerned, the NFL players who are taking a knee against the national anthem have their endorsement.

It seems Westboro prefers sitting to kneeling, but the basic sentiment is the same.

Westboro Baptist Church takes a seat for the entirety of the national anthem!

Perhaps this isn’t that surprising, considering that Westboro is also staunchly anti-Trump.  In a sprightly social media exchange in 2013, Westboro tweeted the edifying proclamation that Trump “is a hypocritical bastard.”

Westboro came out in 2016 to protest Trump at a few of his campaign rallies, continuing to flog the theme that Trump is associated with condemnation of America and going to hell.

LIVE: Picketing #DonaldTrump in Wichita. Huge crowd for him to tell OBEY GOD! Nothing else matters! #ObeyForMercy pic.twitter.com/NtQ93HkDCb

Westboro happy to give a new look to your campaign @realDonaldTrump! Thanks for the invite! #wichita@kansasdotcom https://t.co/6ZbeyjScVG

Huffington Post writer Curtis M. Wong, with no apparent sense of irony or proportion, recorded (with surprise) that Westboro wouldn’t be endorsing Trump, and took care to reiterate why HuffPo wouldn’t be doing so either (italics original):

Note to our readers: Donald Trump is a serial liar, rampant xenophobe, racist, misogynist, birther and bully who has repeatedly pledged to ban all Muslims — 1.6 billion members of an entire religion — from entering the U.S.

Westboro also turned out to protest Trump at his inauguration in January.

The sense of relentless meltdown from the activist left keeps growing.  When your views are exactly in sync with those of the hate-filled Westboro cult – e.g., you look for ways to dishonor America, and you blindly hate Trump – it might be time to revisit some assumptions.

But that may not happen any time soon.  People who react with uncontrollable anger to Trump, and who shout “racism” about literally everything, seem to be whipsawed by a force that propels them into deeper fury and inconsistency with each day that passes.  (See Ben Bowles on that very topic here.)

Howard Portnoy wrote today about the librarian at a school in Massachusetts to which Melania Trump had given a set of Dr. Seuss books, as a gift commemorating National Read a Book Day.  The librarian, instead of responding politely to this admittedly formulaic, but no doubt kindly meant gesture, decided to denounce both Melania Trump and Dr. Seuss.

Howard quotes from her screed against the author:

Another fact that many people are unaware of is that Dr. Seuss’s illustrations are steeped in racist propaganda, caricatures, and harmful stereotypes. Open one of his books (If I Ran a Zoo or And to Think That I Saw It On Mulberry Street, for example), and you’ll see the racist mockery in his art. … Scholar Philip Nel’s new book, Was the Cat in the Hat Black? The Hidden Racism of Children’s Literature, and the Need for Diverse Books, further explores and shines a spotlight on the systemic racism and oppression in education and literature.

Liz Phipps Soeiro (the librarian) and Curtis Wong could change places with little loss of fidelity – and neither seems to be that different in tone from Westboro.

But the icing on the cake, as Howard notes, is the news that Ms. Soeiro herself dressed up as the Cat in the Hat in 2015 to celebrate the birthday of Theodor Geisel, the man who wrote as Dr. Seuss.

These various extreme voices have the right, of course, to be as insistently irrational as they like in their discourse.

They just don’t have the right to make it compulsory on anyone else.

Coda: In a remarkable, unintended confluence of events (presumably unintended, at any rate), Soeiro’s Cambridgeport School tweeted 26 September on the topic of “taking a stand.”  You can do it, says the school, by taking a knee.  Or — choice number two, echoing that of Westboro — you can do it by sitting down.

How do you "Stand Up"? pic.twitter.com/yHOdfVsjpi

Notice that simply standing for what you believe in doesn’t appear in the list.  That’s what jumps out at saddened NFL fans.