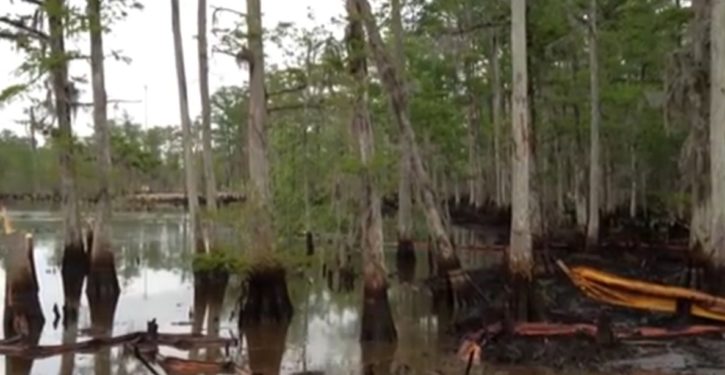 Ready for its draining. (Image: Screen grab of YouTube video)

Bureaucracies have successfully evaded congressional budget oversight for years by illegally hiring contract labor to take the place of employees, according to a Competitive Enterprise Institute (CEI) report released Tuesday.

Bureaucracies commit thousands of felonies a day, misappropriating funds not approved by Congress and expanding agency influence at a time when government agencies should cut back.

Bureaucracies freeze hiring new employees, ideally to stop expansion and cut costs, when under pressure to reform or adapt to budget cuts. Many agencies continue to grow despite budget cutbacks, however, by illegally hiring outside contract labor.

“While contracting for these services is contrary to the law, this practice has become so ubiquitous in government that it passes without notice,” the CEI report’s author Robert Hanrahan wrote.

Any labor that uses a “skill,” which is nearly every job in the federal government, is classified under “personal services” hiring. With few exceptions, agencies hiring without Congressional approval for the expenditures is illegal under a set of statutes known as the Anti Deficiency Act (ADA).

“Any federal employee who accepts voluntary services or employs personal services may be terminated, fined, and imprisoned for up to two years. But remarkably, the prohibition on personal services is rarely recognized, much less enforced,” Hanrahan wrote.

“The bureaucracy grows ever larger thanks to this bureaucratic ‘dark energy’ — an invisible force that allows government to expand at the discretion of the bureaucracy alone,” he added.

“The NNSA … has no authorization to use program funds for support service contractors, and is under a cap on federal staff explicitly intended to reduce transactional oversight,” Hanrahan’s report states. “Yet, within the NNSA, over $100 million per year are redirected from programs to hire support contractors just in the Washington D.C. area.”

“When the prohibition is flouted, the benefits accrue mostly to the Washington, D.C. region,” Hanrahan wrote.

This report, by Tim Pearce, was cross-posted by arrangement with the Daily Caller News Foundation.

Mitch McConnell intends to schedule vote on Graham-Cassidy
Next Post
Carlson: Bill Clinton, who ran twice against illegal immigration, could not do that now