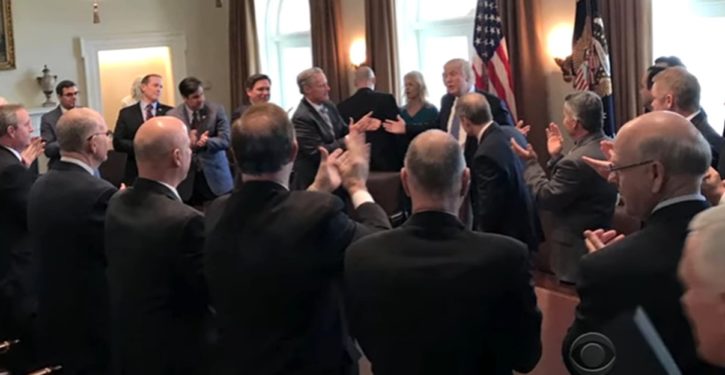 The House Freedom Caucus is hoping to force a vote on a clean Obamacare repeal bill through a rare congressional procedure in the coming weeks.

The HFC, chaired by North Carolina Republican Rep. [score]Mark Meadows[/score], will encourage members to sign a “discharge petition” allowing a bill similar to the December 2015 repeal of Obamacare — which passed both houses of Congress but was vetoed by then-President Barack Obama — to proceed to a floor vote.

If the petition receives 218 signatures, it will pull a March bill identical to the 2015 Affordable Care Act repeal out of committee and straight to a floor vote, a spokeswoman for Meadows told The Daily Caller News Foundation.

The parliamentary rule bypasses a number of obstacles awaiting other Obamacare repeal efforts, in effect resurrecting the 2015 repeal legislation. The petition, filed by Virginia Republican Rep. [score]Thomas Garrett[/score] and 24 other HFC members July 19, discharges the House Energy and Commerce Subcommittee on Health of it’s duty to consider the bill in full.

Garrett’s petition to revive the March clean repeal bill, sponsored by Ohio Rep. [score]Jim Jordan[/score], had to spend a certain number of days in the House Committee on Rules before it could collect signatures. That mandatory waiting period has expired and the HFC will begin collect signatures when the House convenes in procedural session Friday.

Several HFC members have returned to Washington to sign the petition, and “over the recess we’ll be encouraging republican colleagues to come sign on,” Meadows’s spokeswoman told TheDCNF.

Assuming the petition can garner the 218 needed signatures, it would still need to pass a House floor vote and the sharply divided Senate — which failed to pass a so-called “skinny repeal” in July — before it could become law.

While many in Congress have said it’s time to move on to other areas of the Republican priorities like tax reform, immigration, and infrastructure, President Donald Trump is still pressing for a win.