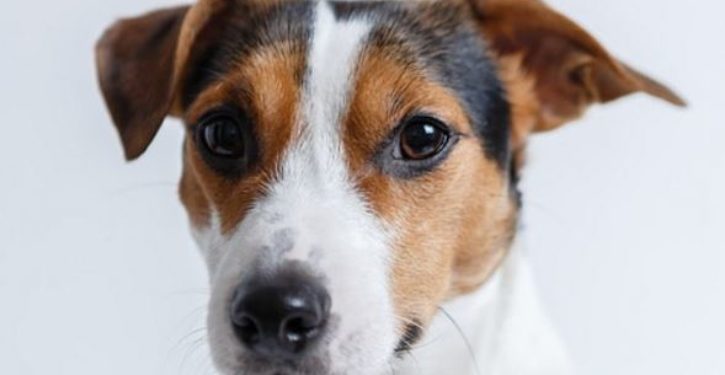 Ever since the T was appended to the acronym LBG, some crazy headline have appeared. Earlier this month, The Sun carried a story about a newborn registered as “gender unknown” because its “parent” (who claims to be neither male nor female but sports a mustache and beard) insists that only the infant can decide on its sex.

Many of these travesties emanate from the UK, which in June refused to grant certification to a Jewish school for refusing to teaching gender reassignment issues to 8-year-olds.

If you wondered how far the lunacy can go, the latest — again from Britain — suggests the fight has just begun. An article published in yesterday’s Guardian reports on (drum roll) a sex-change operation administered on a dog. The piece was written by the pooch’s owner, Mary Finlay, who says she became concerned when her newly acquired Jack Russell Terrier, Molly, began exhibiting “peculiarities in her behavior”:

Indoors, when Molly needed to pee, she would squat on her training mat as she had been taught, but when Frank took her out he noticed that she cocked her leg like a boy dog. We had spotted before that she had a tiny appendage between her back legs, but we thought little of it until we noticed that it sometimes seemed to cause her discomfort when she tried to sit down.

Finlay describes other of Molly’s behaviors that were more typical of a male dog, such as “mounting cushions and soft toys.”

She took Molly to the vet, who diagnosed the dog as a male pseudohermaphrodite, which  — according to the website Pet Place, which Finlay helpfully links to — is a condition typified by XY chromosomes and testicles but genitals that appear feminine.

The vet also informed Finlay that in 15 years of practice, she had never encountered another case. Her recommendation was surgery, even though she concedes that “in some cases no operation is needed.”

Many pet owners at this juncture might want a second opinion before subjecting their pooch to painful surgery. Not Finlay, who saw an opportunity for a byline in a major paper.

The dog survived the operation, though her owner tells us “she was exhausted the first day back and lay at the end of our bed, crying.”

There were also complications: “When we spotted blood, we rushed her back to the vet, where she ended up spending a few more days being treated with drugs and antibiotics.”

In the end, this sounds to be like animal cruelty. I’m no vet of course, and I could be wrong. Certainly, Molly’s ordeal will take some of the humor out of the 2015 spoof at NewsParody.com titled “California Veterinarian Now Offering Sex Change Operations For Transgender Dogs And Cats.”