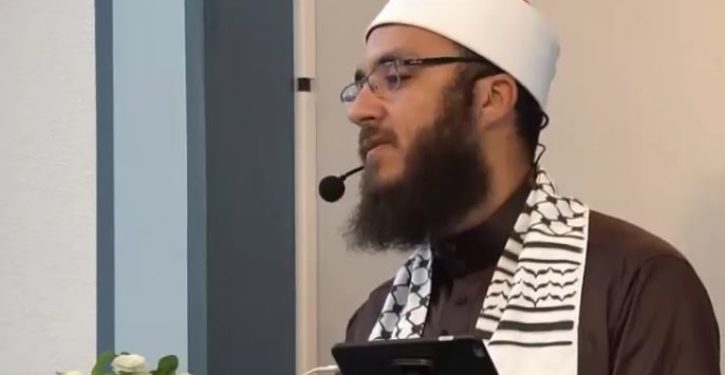 Fluency in Arabic would help. Failing that, it comes down to a matter of which media source you are more willing to trust. Your options are the Middle East Media Research Institute (MEMRI) and The Washington Post.

According to MEMRI, on July 21, an Egyptian-born American preacher by the name of Ammar Shahin delivered a sermon at the Islamic Center of Davis, Calif., where he serves as Imam.

In it he cited an antisemitic hadith, according to which the Muslims would fight the Jews on Judgment Day, and prayed to Allah to “liberate the Al-Aqsa Mosque from the filth of the Jews” and to “annihilate them down to the very last one,” not sparing any of them. “Oh Allah, make this happen by our hands. Let us play a part in this,” he prayed in the sermon, which was posted on the Davis Masjid YouTube channel.

The video follows, along with a transcript of the relevant highlights:

Allah does not change the situation of people ‘until they change their own situation.’ The Prophet Muhammad said: ‘Judgment Day will not come until the Muslims fight the Jews, and the Jews hide behind stones and trees, and the stones and the trees say: Oh Muslim, oh servant of Allah…’ They will not say: Oh Egyptian, oh Palestinian, oh Jordanian, oh Syrian, oh Afghan, oh Pakistani. The Prophet Muhammad says that they time will come, the Last Hour will not take place until the Muslims fight the Jews. We don’t say if it is in Palestine or another place. Until they fight… When that war breaks out, they will run and hide behind every rock, and house, and wall, and trees. The house, the wall, and the trees will call upon the Muslims. It will say: Oh Muslim… It will not say: Oh Palestinian, oh Egyptian, oh Syrian, oh Afghan, oh Pakistani, oh Indian… No, it will say: Oh Muslim. Muslim. When Muslims come back… ‘Come, there is someone behind me – except for the Gharqad tree, which is the tree of the Jews. Except for a certain tree that they are growing today in Palestine, in that area, except this form of tree, which they are growing today… That’s the tree that will not speak to the Muslims.

Now for the Post’s take on this:

On Wednesday, Shahin told The Washington Post that he wasn’t speaking of Jews in general but “specifically about this group shutting down the mosque — these soldiers, or settlers, or fighters, or oppressors.” He said he focused on the situation at al-Aqsa because so many U.S. Muslims aren’t aware of it. He said he regularly speaks out against the Islamic State and extremism by Muslims and has made statements against Muslim extremist attacks in Europe, South Asia and elsewhere.

“It’s unfair when I have spoken about nonviolence, and here is some two minutes. My record is very clear, I have always been against violence,” he said.

North Korea may have just shown a capability to strike the continental U.S.
Next Post
I stopped googling everything, and this is what happened to my brain