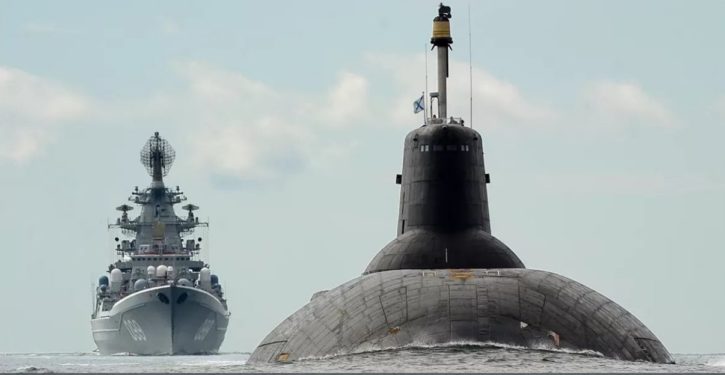 In a big two-fer this week, Russia is simultaneously hosting the first Chinese naval task group ever to conduct exercises in the Baltic Sea, and bringing the last surviving Typhoon ballistic missile submarine into the Baltic for an unprecedented visit by an SSBN.

The Baltic got so lucky because it’s ground zero for the Russia-NATO theater-level confrontation right now, and has been for the last two-to-three years.  The timing is due to the celebration of Russia’s Navy Day — on 30 July — and the association of Russian naval tradition with the bases in the Baltic Sea (Kronshtadt, St. Petersburg).

Most of the tactical Russia-NATO confrontations have been in the form of unsafe maneuvers by Russian warplanes around NATO planes and ships.  Russia has also made a show of operationalizing her Iskander short-range missiles in the Kaliningrad enclave in the Baltic, and conducting an increasing number of military exercises on the borders of Finland and the Baltic Republics, as well as deploying forces to Belarus.

Beyond the localized Baltic line of confrontation, Russia in recent years has ramped up strategic bomber flights near the UK, and even reportedly operated a missile submarine in the Bay of Biscay off France – a deployment area not seen for decades.

Now Russia has invited China into the Baltic Sea, for the first time ever to conduct naval exercises.  (Chinese warships visited Finland in a pathbreaking deployment in 2015, so this isn’t China’s first time in the Baltic Sea.)  The current Chinese task group, consisting of Type 052D destroyer Hefei, frigate Yuncheng, and replenishment ship Luomahu, arrived in Kaliningrad – again, a Russian enclave in the Baltic – on 21 July.  (The Royal Navy and Royal Netherlands Navy kept the ships under surveillance as they transited the English Channel and North Sea.)

The exercise, called Joint Sea, kicked off today (24 July) in the waters off Kaliningrad.

Chinese warships have arrived to Kaliningrad for the #Russia–#China joint military exercises in the Baltic.pic.twitter.com/HdIsB3epiY

The Hefei task group participated in exercises in the eastern Mediterranean earlier this month.  In a sign of China’s significantly expanding naval presence in the world’s oceans, there is another Chinese task group currently operating in the Mediterranean region.  This task group, which departed Shanghai in April, is on a 180-day show-the-flag deployment around the Eastern hemisphere, and arrived in Istanbul on 18 July.  It consists of Type 052C destroyer Changchun, frigate Jingzhou, and replenishment ship Chaohu.

There was speculation that the Changchun task group would operate in the Black Sea – perhaps while Hefei’s group is in the Baltic – but on Friday, local sources reported that the Changchun group had left Istanbul and headed back west to the Med.

PLAN ships Changchun, Jingzhou & Chaohu ended their visit in Istanbul and returned to the Mediterranean. They didn't sailed to Black Sea. pic.twitter.com/co4WC1wntf

Meanwhile, in another – heavily freighted – first-ever, Typhoon SSBN Dmitri Donskoi has deployed to the Baltic with a task force from the Russian Northern Fleet.  The Typhoon is the last of her kind, and remains an operational strategic ballistic missile submarine, carrying 20 of Russia’s most advanced Bulava submarine-launched ballistic missiles.*

The Typhoon is a nuclear-powered submarine (signified by the “N” in SSBN) as well as carrying strategic SLBMs.  This is a double-whammy in terms of unprecedented presence in the Baltic.  Apparently to ensure that NATO gets the message, the submarine transited all the way from her Northern Fleet homeport on the surface (which isn’t a lot of fun for the crew in the best of circumstances, and rarely pleasant at any time in the roiling waters of the Norwegian Sea).

Just a few observations.  One, Russia is clearly sending a very intentional signal with all this high-profile, in-your-face activity.

That said, the signal sent by the Typhoon is subtler than it seems.  As discussed in 2016, when the Russian missile sub was reported to be in the Bay of Biscay (link above), a strategic SLBM of the kind carried by Russia’s SSBNs doesn’t pose an effective threat to Europe, if it’s fired from a position so close.

On the other hand, from any point in or near Europe running from the Baltic Sea south – including the Bay of Biscay or a position off the UK – a Russian SSBN can launch an SLBM at North America, against which we have no deployed missile intercept capability.

The reason we don’t have such a capability is that Obama dealt it away in 2009, deciding in September of that year to never deploy the ground-based interceptor (GBI) field that George W. Bush had planned to put in Poland.  (Its operational date was to be 2013.)  Obama’s follow-on plan did not envision making up the deficit in North American defense caused by this move.  Obama planned only to defend Europe from missiles launched from Southwest Asia (i.e., Iran).

See the 2016 post for more discussion on that, and what concerned members of Congress have tried to do in the years since.  The bottom line remains that we still have no defense, not even a rudimentary one, against ICBMs or SLBMs launched on a westerly trajectory (i.e., not over the Arctic) from around Europe, or from points just west of Europe.

With the Typhoon in the Baltic, Russia is undoubtedly reminding us of that.  It is also worth pointing out that Russia brought the Typhoon to the Baltic, and not a Borei-class SSBN, the newer and more capable class that represents the Russian ballistic missile fleet’s future.  This may have been merely a timing issue.  But the Borei can do something the Typhoon can’t do, and that’s launch cruise missiles as well as Bulava SLBMs.

The Borei’s cruise missiles could attack Europe very effectively from the Baltic.  With the Typhoon, Moscow may be communicating that Russia’s priority is holding the United States at risk, and not quite so much Europe – at least, perhaps, not Moscow-friendly NATO capitals like Berlin, Madrid, Rome, and Athens.

Regarding China’s naval activism, it has unquestionably ramped up in the last few years.  Joining the Russian navy for exercises in the Baltic is just the latest in a series of high-profile moves, which include formally establishing a naval base in Djibouti, and continuing to signal the intention to cultivate basing “infrastructure” agreements in places like Pakistan and Malaysia.

The Chinese aren’t ten feet tall yet, by any means.  You won’t see a lot of reporting on this, but the Hefei task group in the Baltic originally deployed with a third warship, the Type 052D destroyer Changsha.  (The UK Telegraph’s reporting on the task group reflected that information.)

But Changsha didn’t make it to the Baltic.  In fact, the destroyer apparently suffered a propulsion casualty of some kind in June, and was adrift for days in the Indian Ocean.  Chinese media haven’t specified what happened to Changsha afterward, but in the past week Chinese outlets have referred only to Hefei, Yuncheng, and Luomahu heading to the Baltic.  Local reporting on the ships’ arrival in Kaliningrad did not mention Changsha.

It’s been nearly 28 years since the Berlin Wall fell.  But a more useful comparison in 2017 is one that goes further back, to the period more than 100 years ago when more than half a dozen large, ocean-going navies had similar capabilities, and were able to effectively challenge the naval hegemon of the day – Great Britain – as well as each other, in local confrontations and specific dimensions of naval warfare.  In the geographic and disciplinary variety of today’s naval developments, what we are seeing is less like the Cold War, and more like the prelude, not to World War II, but to World War I.

World War I with multiple nuclear powers, that is.

* Note: in the midst of the Cold War, there was a class of 1950s-era Russian missile sub – a modification of the diesel-powered Golf class, or Project 629 – that ultimately remained in the Baltic Fleet as a handful of units capable of launching short-range ballistic missiles.  These subs could carry the SS-N-4, a Scud variant, and the SS-N-5 “Sark,” a naval follow-on.  For a period of time in the 1970s and early 1980s, the Golf SSBs deployed around Europe to hold the U.S. allies there at risk.  They had ceased operation by the mid-1980s, and were decommissioned by 1990.