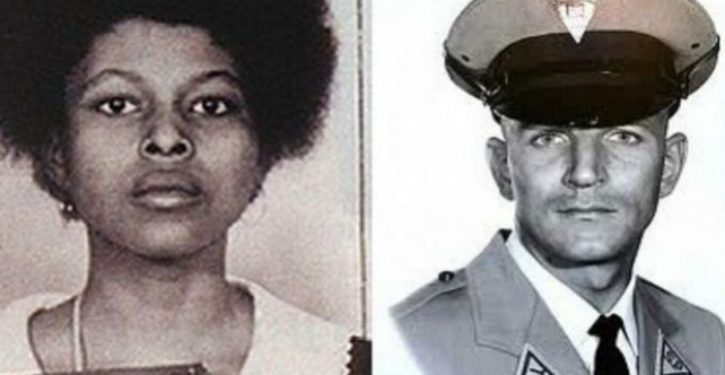 It comes as no surprise that Women’s March leader and Muslim activist Linda Sarsour suffers from a persecution complex. She evidently thinks that anyone who disagrees with her is either a white nationalist or a member of the alt-right.

On Tuesday, Sarsour accused CNN correspondent Jake Tapper on Twitter of being a member of the alt-right, a small white nationalist faction on the far-right, after he criticized her support of convicted cop-killer and domestic terrorist Assata Shakur (aka, Joanne Chesimard), who is currently living in asylum in Cuba.

Tapper took issue with a rather silly tweet by the Women’s March that wished the cold-blooded murderer of a New Jersey State Police officer a happy birthday and saluted her as “in the struggle”:

In response to the tweet, Tapper, a card-carrying liberal, merely stated this inconvenient truth about Sarsour’s hero and asked if there weren’t other progressives willing to take a stand against the tweet:

Shakur is a cop-killer fugitive in Cuba. This, ugly sentiments from @lsarsour & @dykemarchchi …Any progressives out there condemning this? https://t.co/rXnHLgE2hR

.@jaketapper joins the ranks of the alt-right to target me online. Welcome to the party.

What ensued was a battle royale between a member of the Left and a member of the radical Left. It began with a dare by Sarsour to “please share” evidence of her ugly sentiments. Tapper responded by reminding Sarsour of her comments about activist Ayaan Hirsi Ali, who frequently speaks out against radical Islam. Ever the voice of reason, Sarsour said that “Ali’s vagina should be taken away,” adding that she doesn’t deserve to be a woman.

Sarsour’s support base naturally sided with her with the hashtag #IStandWithLinda:

Jake, this is shamefully ahistorical & this is how people get killed. You know better than this. #IStandWithLinda https://t.co/VYs3mpwOOC

the attacks on @lsarsour are baseless and cruel. they are from a place of insecurity & fear -Linda is inspiration to us all #IStandWithLinda

We not only stand with Linda, we look forward to honoring her for her relentless fight 4 justice. #IStandWithLinda ✊????✊????✊????

Not everyone was impressed with Sarsour, however. Even left-wing writer Kurt Eichenwald took issue with her silly assertion:

I’ve paid little attention to controversies involving you. But if ur calling @jaketapper alt-right? Not a big credibility boost for u.

As an added irony, The New Republic’s Damon Linker posted an article in The Week just today that lashes out at conservative writers for exposing as commonplace extreme points of view expressed on social media by liberal commentators. Writes Linker:

By way of answering Linker’s assertion, consider that Sarsour by herself has a quarter million followers on Twitter. Multiply that by the number of equally deranged feminists, trans activists, and other social justice warriors with equally robust followings, and Linker’s argument falls apart.