Speeches about the man and his contributions were apparently not considered. Then again, what was there to say about a man who was arrested by New York police more than thirty times since 1980 on charges such as assault, resisting arrest, and grand larceny.

About the only things New Yorkers seem to remember about Eric Garner is (1) that he was black and (2) that he died at the hands of police. Most are willing to overlook the facts that he was trying to resist arrest at the time and that a person genuinely unable to breathe is also unable to say, “I can’t breathe” or anything else.

This was not enough to deter angry protesters from taking to the streets Monday night, to march and chant “F*ck pigs.” The demonstration was a reprise of the activities that took place following the acquittal of the officer who placed a chokehold on Garner in an attempt to restrain him.

As they marched through Staten Island, where Garner lived and died, the crowd interspersed their obscene chants with shouts of “No more choke-hold murders,” “No more comrades in jail!” and “No justice, no peace.” Police officers trailed behind the protesters, presumably to make sure the march remained non-violent.

At one point, officers tried to move the protesters from the streets to the sidewalks, warning protesters that they would be arrested should they fail to do so. The New York Police Department told The Daily Caller News Foundation that no arrests were made. 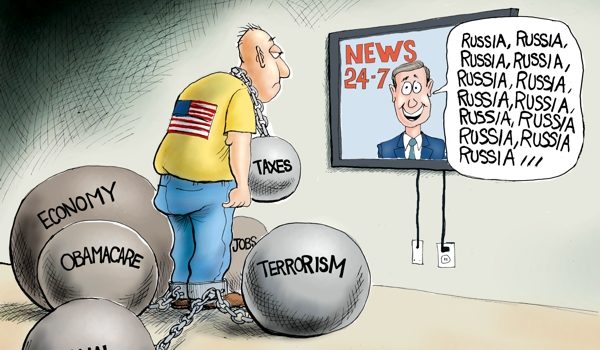 Cartoon of the Day: That heavy, bloated feeling
Next Post
Weaponizing language: The new ‘AP Stylebook’ launches assault on truth