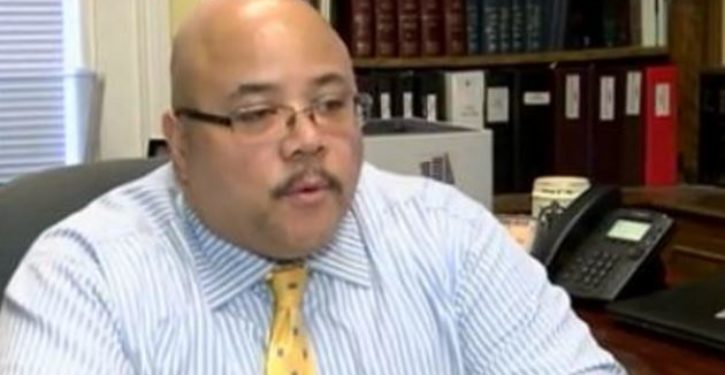 A former Virginia city attorney is accused of making a fake racist phone call to himself and causing the cancellation of a city council meeting, court documents allege.

Former Petersburg Attorney Brian Telfair, who left office Mar. 4, previously claimed that a redneck called him and made racial threats against him, prompting the city to shut down a planned council meeting, The Progress-Index reported Thursday.

New court documents show that Telfair arranged to have an employee buy a prepaid burner phone for him, after which he phoned himself.

After the ruse was discovered, Telfair told police that he faced a lot of stress from city members fighting among themselves, according to court documents, which further note:

He was being blamed for the problem with finances even though he had nothing to do with the money and the mayor was not a leader. No person should have to go through what he went through.

Even though his client has admitted guilt, Telfair’s lawyer denies the charges, claiming that the allegations were just a series of targets to discredit his client. In a statement, the attorney said:

It seems as though Mr. Telfair has been targeted because of the knowledge he possesses surrounding some of the malfeasance in the city of Petersburg government over the course of his tenure there. There is an effort to discredit and dismiss him as well as his previously voiced concerns about what was happening in Petersburg.  The ‘revelation’ from the court files curiously appears in the weeks leading up to one of his court appearances.

Police charged Telfair with a class one misdemeanor of filing a false police report.