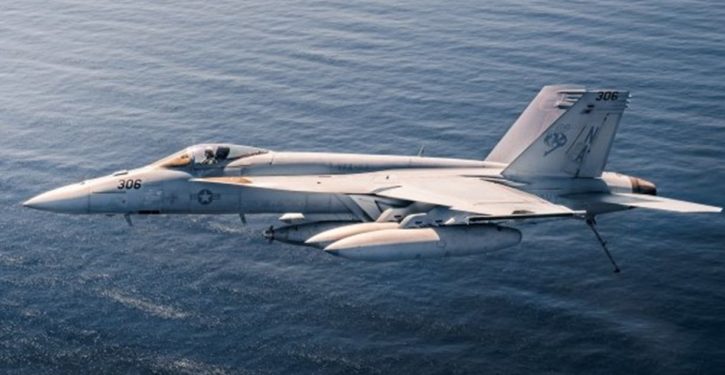 [Besides the fact that an air-to-air shootdown is a big deal in itself, this development is at least as big as the launch of Iranian missiles into eastern Syria on Saturday.  As previously predicted, if all the outside sponsors continue to shoot in the direction of the threat, we’re going to end up shooting at each other.  That hour is now perilously close.  The U.S has been careful to avoid shooting at Syrian regime forces up to now, but the fight for eastern Syria is forcing the choice to either target regime assets, or back off from support of our own coalition fighters on the ground.  Iran won’t take this well. Things are heating up fast. – J.E.]

A U.S. fighter jet shot down a Syrian regime aircraft after it attacked U.S.-backed forces in Syria on Sunday, according to the U.S.-led Operation Inherent Resolve coalition.

An F/A-18E Super Hornet shot down the Syrian SU-22 in what the coalition said was a “show of force” after the Syrian fighter dropped several bombs near Syrian Democratic Forces (SDF) fighters south of Taqbah. The coalition acted “in accordance with rules of engagement and in collective self-defense of Coalition partnered forces,” according to the task force’s statement. The engagement represents the first time a U.S. aircraft has shot down an aircraft belonging to the Bashar al-Assad regime.

“The Coalition’s mission is to defeat ISIS in Iraq and Syria.  The Coalition does not seek to fight Syrian regime, Russian, or pro-regime forces partnered with them, but will not hesitate to defend Coalition or partner forces from any threat,” said the coalition statement. “The Coalition presence in Syria addresses the imminent threat ISIS in Syria poses globally. The demonstrated hostile intent and actions of pro-regime forces toward Coalition and partner forces in Syria conducting legitimate counter-ISIS operations will not be tolerated.”

The U.S. used the established “de-confliction line” to notify Russia after the Syrian jets attacked.

Coalition forces, including the SDF, are currently engaged in operations against ISIS’s capital of Raqqah, which lies northeast of Taqbah.

The statement concluded by calling “on all parties to focus their efforts on the defeat of ISIS, which is our common enemy and the greatest threat to regional and worldwide peace and security.”

Jay Sekulow, Trump attorney: POTUS is NOT being investigated for obstruction
Next Post
The sacrificial holy lambs of the West