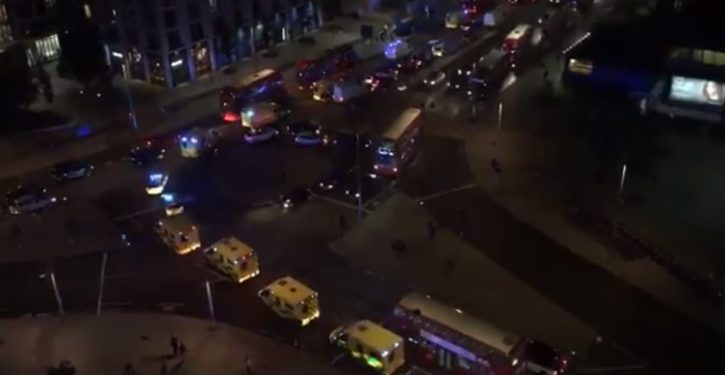 Ambulances line up to collect the dozens of injured victims in simultaneous London terror attacks on 3-4 June. (Image: Screen grab of YouTube video)

[See link to Saturday night update at the bottom.  The death toll is at 9 so far: 6 victims and 3 attackers.]

An eyewitness has told BBC that the men stabbing people on the London Bridge shouted “This is for Allah” while they committed acts of terror.

The Metropolitan Police confirmed mere hours after the incidents hit in London Bridge and Borough Market that the attacks were indeed terrorist attacks, and this eyewitness report, if confirmed, shows that the events of Saturday evening are Islamic in nature.

According to the eyewitness, a van veered off the road and began driving on the pavement, hitting pedestrians along the way, and during the attack, the van stopped.

Three men jumped out and started stabbing people, shouting “This is for Allah.”

“They literally just started kicking them, punching them, they took out knives. It was a rampage really,” the eyewitness said.

“Throughout the whole way across the bridge, there were people littered across bleeding,” he added. “People were trying to help each other.”

These eyewitnesses told The Guardian’s Lisa O’Carroll that two men started stabbing people outside a restaurant in Borough Market, close to where the first terror attack took place on London Bridge, resulting in multiple fatalities.

“I saw two guys with big knives downstairs outside Roast. They were stabbing people,” the eyewitnesses said.

Perhaps the most jarring part of the testimony was a report that, instead of running to the stabbing to stop it, the police turned around and ran the other way.

With the police out of sight, onlookers began yelling “stop, stop” and throwing chairs.

But then police arrived at the scene and “shot straight away.”

Police community support officers (PCSOs) operate usually in a paid, full-time role, and while “PCSOs do not have the same powers as regular police officers, they still carry a lot of responsibility, and are a critical part of the police service.”

More than 90 percent of police officers in London do not carry guns and instead carry mace, handcuffs, batons and, on occasion, a stun gun.

Mere hours after the events took place on London Bridge and at Borough Market, Metropolitan Police labeled them as terror attacks.