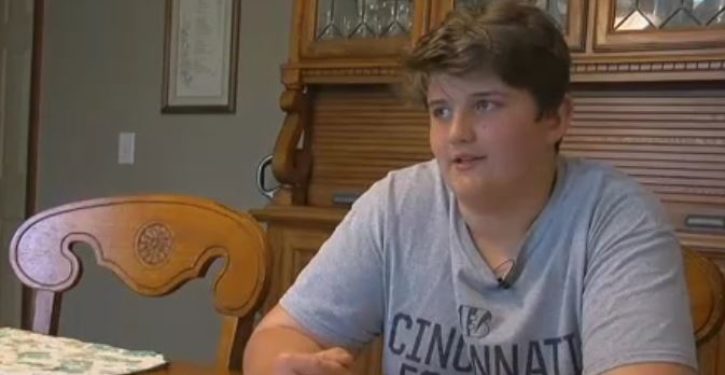 Spare the rod, spoil the child goes the old adage. When children stray, parents and their day-time surrogates once their child reaches a certain age — aka, the school — need to take corrective action.

That evidently is what the adults who run Edgewood Middle School in Trenton, Ohio, believed they were doing when they handed down a 10-day suspension to 12-year-old Zachary Bowlin last week.

So what crime had young Zachary committed that deserved so harsh a punishment? He had “liked” a picture of a gun on Instagram. If that’s not sufficiently over-the-top, the gun in the photo was the Airsoft variety.

And if you’re still not shaking your head in disbelief, try this: On the morning the child was summoned to the principal’s office for his offense, he was patted down.

I was livid. I mean, I’m sitting here thinking ‘You just suspended him for ten days for liking a picture of a gun on a social media site. He never shared, he never commented, he never made a threatening post … anything on the site, just liked it.

According to Fox affiliate WXIX, the school dropped the suspension after the story went public and has since said there will be no repercussions for the child’s actions.

Last Friday, an email went out to the school community advising:

Yesterday evening school officials were made aware to [sic] an alleged threat of a student bringing a gun to school. We act on any potential threat to student safety swiftly and with the utmost importance. This morning, the alleged threat was addressed and we can assure you that all students at Edgewood Middle School are safe and school will continue as normal. Thank you.

Superintendent Russ Fussnecker has further clarified the district’s position with a statement that reads:

Concerning the recent social media posting of a gun with the caption “Ready”, and the liking of this post by another student, the policy at Edgewood City Schools reads as follows:

The Board has a “zero tolerance” of violent, disruptive, harassing, intimidating, bullying, or any other inappropriate behavior by its students.

Students are also subject to discipline as outlined in the Student Code of Conduct that occurs off school property when the misbehavior adversely affects the educational process.

As the Superintendent of the Edgewood City Schools, I assure you that any social media threat will be taken serious [sic] including those who “like” the post when it potentially endangers the health and safety of students or adversely affects the educational process.