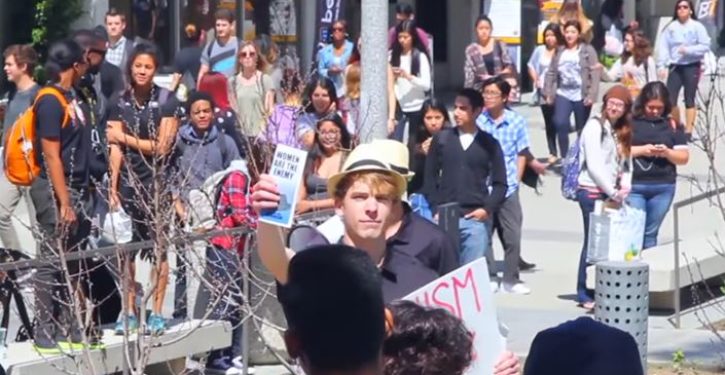 If you know anything about the mind of today’s collegian, then you have already guessed that protesters at Iowa State University’s Central Campus last Friday were not objecting to the slavery that persists to this day in sub-Saharan Africa. I would wager that these snowflakes have no idea that slavery endures — and not just in Africa but large swaths of Asia.

So what were these demonstrators militating against? The answer is hard labor. As in the kind you are sentenced to as punishment for serious offenses, usually of a capital nature.

ISU Student Action, a student organization focused on activism, organized the protest on the basis that prisoners may be paid as little as 15 cents per hour. It also protested the use of prison labor to build furnishings for residence halls and other buildings across campus.

“Iowa prison industries should be more interested in reform and community change but are instead interested in profiting off nearly-free labor,” Apple Amos, a junior in biology who spoke at the protest, said.

But wait, as Ron Popeil might say, there’s more:

The protesters’ charges broadened as they directed their attention to racial problems within Iowa Prison Industries. African-Americans make up about 3 percent of Iowa’s population, but nearly 26 percent of all Iowa prisoners are black, according to participants in the protest.

There is plenty for social justice warriors to get exercised about these days. Even slavery, and not the virtual kind. Just today, LU carried a report that migrants seeking refuge in Libya are being openly traded in “public slave markets” throughout the country.

Or how about the opening of a concentration camp for homosexuals in Chechnya? That’s a story of real oppression in today’s headlines. Of course, liberals are bound to have a problem with this news item insofar Chechnya is a majority-Muslim country, making the story a clash between protected classes.

Nancy Pelosi politicizes faith at rally in California
Next Post
Obama to speak in Berlin, meet with Merkel during Trump’s attendance at NATO summit