As J.E. Dyer has pointed out, Obama National Security Adviser Susan Rice, if nothing else, is guilty of leaking Mike Flynn’s name, which is a criminal act. But Rice’s dereliction probably runs far beyond that one action.

Predictably, the Left is circling the wagons, seeking the change the conversation from Rice’s dubious request for on Trump-related communications to Trump’s “collusion” with Russia. In the process, libs are also identifying the real motivation for singling out Rice. On Tuesday’s edition of “Hardball,” Chris Matthews and Mother Jones D.C. bureau Chief David Corn presented the theory that the accusations against Rice arose out of her race (black) and her sex (female).

Matthews was off his rocker from the show’s opening minute, denouncing the Rice story as something pushed by the President to “distract attention from the investigation” even though he immediately touted colleague Andrea Mitchell’s lengthy interview with Rice hours earlier.

“Why is he going after Susan Rice? It’s like he pulls out — he’s like an old deejay. He pulls out the old records from 20 years ago and plays them again,” Matthews later wondered to Corn and fellow panelist Simon Marks (who unsuccessfully tried to argue that Rice has done herself no favors in giving contradictory statements). [Emphasis added]

“After a series of clips from Republican Senators [score]Rand [/score]Paul (Ky.), [score]Lindsey Graham[/score] (S.C.), and [score]Tom Cotton[/score] (Ark.), Matthews quipped, ‘OK, Bates Motel.’ He then read a Mike Huckabee tweet about Rice being in an orange jumpsuit, and it was at this point that the three panelists lost their minds,” Curtis Houck said, posting a partial transcript of the exchange:

CHRIS MATTHEWS: I mean, Huckabee has no shame. These guys are trooping along, like camp followers of Trump.

SIMON MARKS: They’re looking for a piñata? They found one in Susan Rice. I do think —

MARKS: — well, that’s true. That’s also true. But I do think she slightly played into her hand — into their hands.

MARKS: No. Clearly not. But the best things Susan Rice could do is not —

MATTHEWS: Susan Rice’s job is to watch national security. As she told Andrea today, our colleague, she made it very clear what she was doing was when she saw an American name show up in a surveillance of a foreign perhaps agent, she wanted to know who that was. What’s wrong with that?

Corn later repeated Matthews’ charges of sexism, and claimed those covering the controversy are racists:

At the end of the day, we need some element of decency. When Rand Paul gets out there and says she’s abused this right, there is not an iota of evidence that she’s abused anything. Calling her Typhoid Mary? She — all we know now is that she did her job. Did she do something wrong? There is no information indicating that. So they are making her, you know, basically they’re defaming her without any reason to do so because she’s a woman. Maybe because she’s a black woman. Maybe because they didn’t like her during Benghazi.

Of course, Corn didn’t note that Rice went on no less than five Sunday programs to lie about the Benghazi terror attack, blaming it on an obscure video.

But hey, what difference does it make, since facts are now considered racist.

Top Democrat on intel committee: Multiple Trump associates ‘will probably go to jail’
Next Post
Cartoon of the Day: Cleanup on aisle America 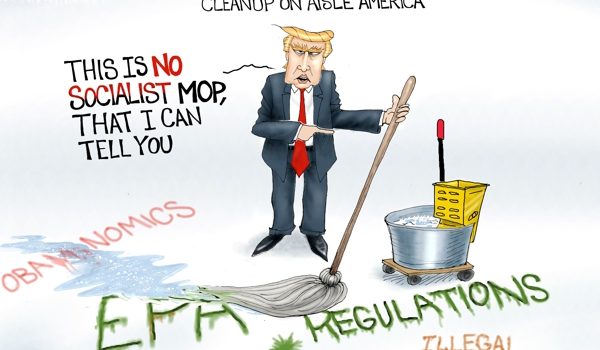