An Immigration and Customs Enforcement report puts a damper on the argument that sanctuary cities aren’t a problem because they shield only non-violent illegal immigrants.

The report, which covers Feb, 4 through 10, tallied 47 declined detainer requests from two dozen jurisdictions across the country.

New York City accounted for 12 of those rejections, far more than any other jurisdiction. Among those illegal aliens released by New York jails were several who had been charged or convicted of violent crimes.

Virginia had the second most declined detainers with six, followed by Washington state, with five. Jails in both states released illegal aliens with convictions for assault, domestic violence and DUI.

This week, Attorney General Jeff Sessions announced that the Department of Justice would withhold federal grant money from sanctuary jurisdictions. President Donald Trump’s January executive order on interior immigration enforcement, which is now facing legal challenges from Seattle and San Francisco, instructed the attorney general to “ensure that jurisdictions that willfully refuse to comply with 8 U.S.C. 1373 (sanctuary jurisdictions) are not eligible to receive Federal grants.”

Between Feb. 4 and Feb. 10, ICE issued 2,285 detainer requests nationwide. Of those, 540 were sent to 10 jurisdictions that ICE says “do not comply with detainers on a routine basis.” Those 10 counties are:

“Consistent with these counties’ policies, ICE expects these detainers to reflect as declined in … future weekly reports,” the report said. 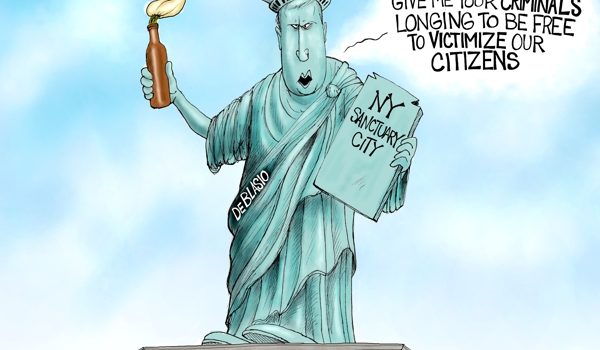 Cartoon of the Day: Statue of Lunacy
Next Post
Mike Pence won’t have dinner with any woman but his wife: The movie