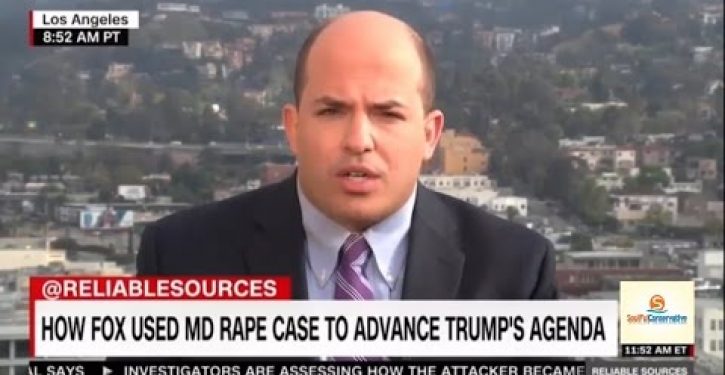 It’s your classic case of “I’m rubber, you’re glue; whatever you say bounces off of me and sticks to you.” Only the venue wasn’t a schoolyard, and the speaker wasn’t ten years old.

It was CNN’s Brian Stelter, who is well past weaning. Stelter was on his home turf Sunday, where he addressed the allegation that his network and the “alphabets” had been remiss in their lax-to-nonexistent coverage of the rape of a 14-year-old girl by two teen illegal aliens in a school bathroom in Rockville, Md.

Stelter’s strategy was to try to turn the accusation on its head by attacking Fox News Channel for over-reporting the story.

Rapes and assaults and murders are local news stories on a daily basis. But when do they break through to become national news and when do they not? This week, the health care bill, the talks in the House, dominated cable news coverage all over the place. But Fox News also focused heavily on another story, and sometimes tying it to the president’s immigration agenda.

Trying to tie the story to immigration? I would submit that the illegal immigrant angle is next to impossible to ignore. This particular criminal act of savagery would not been committed if the two suspects, 17-year-old Jose Montano and 18-year-old Henry Sanchez, had been prevented from entering the country.

In any event, Stelter and company aren’t getting much cover from the big guns on the Left. The New York Times conceded last Saturday that Stelter’s network, along with MSNBC and every other major outlet except for Fox, were ignoring the story. The article’s authors, John Koblin and Nick Corasanti, noted:

There was … considerable time given [by Fox News] to topics, like a rape case in Maryland, that viewers would not have heard about if they had turned to CNN or MSNBC. The rape case, which involved an undocumented immigrant and went virtually uncovered on most networks, received almost hourly updates on Fox, and at times was used as proof that Mr. Trump’s calls for tighter borders and a crackdown on immigration were justified.