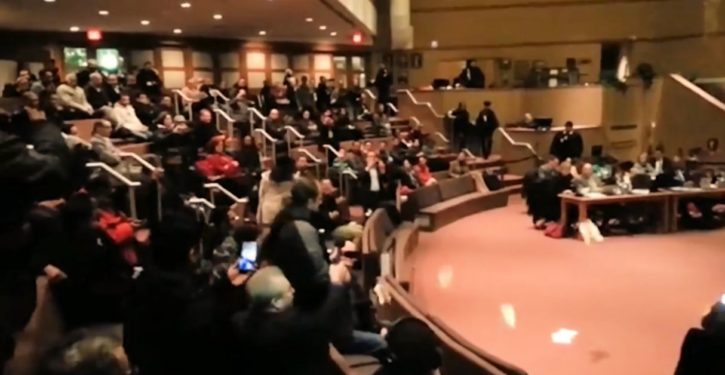 Angry citizen throws pages of a Quran at the Peel District School Board on 22 March. (Image: Screen grab of RiseCanada video via LiveLeak)

A long-simmering issue came to a head this month in the suburbs of Toronto, where the Peel District School Board recently loosened its rules for Muslim sermons delivered on Fridays, on school property.

The policy feud has come to Americans’ attention in the last few days because of a video now circulating, in which opponents of this decision boiled over in anger at a 22 March school board meeting.  One person ripped up a Quran; others accused the school board of opening the door to sharia law, giving Muslims special privileges, and refusing to listen to the concerns of parents.

The remarkable video can be viewed below.  Watch all of it.

The backstory on this goes back several months, and revolves around how the content of Friday sermons for the Muslim students is to be “supervised.”  Formerly, the school board’s policy was that students should use imam-written sermons from a pre-approved sermon bank.   But students could prepare sermons themselves, so long as their content was approved in advance by the school principal.  The sermons were to be delivered in English.  (The religious accommodations for Muslim students have reportedly been in place for at least 15 years; some news sources say “two decades.”)

But some Muslim students – and other Muslims in the community – objected to that policy.  In fact, objections were also made to the policy of limiting group prayer to the Friday sessions.

Interestingly, the history on this seems to have gone by the wayside in the most recent Canadian news reporting – which is now focused on depicting the opponents of the decision as racists and Islamophobes.  The recent reporting frames the issue as if it’s about whether the Muslim students will be allowed to hold their prayers at all.  But it isn’t.  That was never in question.

And back in January, reporting on that was clearer, acknowledging that the decision for the school board was what to do about the preference of some Muslims to avoid the scrutiny each school was empowered to give the Friday sermons, under the old policy.

An accurate summary of a board meeting in January, at which the school board relaxed its old policy of supervision, can be found from CIJ News here.  Its outline gives a picture substantially different from the one suggested in the Toronto Star (above) after the March meeting.  Consider the demands presented by Muslims at the January meeting (and earlier ones):

During the open meetings of Peel District School Board, representatives of the Muslim community in Peel Region demanded more accommodating arrangements for Muslim students at public schools to allow students to pray in groups at school any day of the week and to write and deliver their own sermons.

Although these demands weren’t accommodated entirely, they were accommodated in part.  According to the minutes of the 10 January meeting, the Peel Schools will dispense with the requirement for student-written sermons to be pre-approved by the principal, and will allow Muslim students to pray in groups on days other than Friday, although under different conditions:

Now, here’s where a common link emerges between the concern of the CIJ News site – a Canadian Jewish site – which took care to publicize the Peel Schools kerfuffle in such detail, and the concern of the angry attendees at the 22 March school board meeting (the people we see in the video).

The two groups in question don’t appear to be coordinating, or even to have anything to do with each other.  But what they both face is the very real prospect of sermons being preached against “infidels” – specifically including Jews and Christians – in the schools their children attend.

How do they know that?  Because there are recent examples of just such sermons.  And one of them is from the Peel Schools bank of pre-approved sermons.  CIJ News has a full transcript of the relevant portions, and a video in which a local imam delivers the sermon, expatiating at length on how “the Jews have incurred the wrath of Allah,” and the “Christians are the ones who have deviated,” and everything they believe about Jesus is “disapproved” by Allah, and is evidence that they have “gone off the straight path.”

The other example is the now-infamous case of the imam in Montreal who in December recited a well-known hadith (saying of Mohammed) during a Friday sermon:

As The Daily Caller noted on Saturday, the video of the imam engaged in this recitation surfaced on social media shortly before the 22 March meeting, at which we see the impassioned reaction of the angry attendees.

Just a few comments.  One, if you think you’re going to see a parade of “white Europeans” protesting in the video, think again.  Two, their frustration with being dismissed and treated by the board with sanctimonious condescension is obvious.  Three, at the very end of the video, you can hear a few of them start to sing the national anthem, “O Canada.”

Four, there is no excusing some of the language and behavior, of course.  But focusing on it as if that is what matters, rather than the obvious imbalance in public policy, is a dodge.  It should be scorned as one.

Five, the school board makes an assertion in its “fact sheet” about religious accommodation that many Canadians find questionable, and that is factually incorrect:

There is a significant difference between the Ontario court removal of the Lord’s Prayer [from the schools; see below] and religious accommodation.

The Lord’s Prayer was previously practised by all students, including those who did not practise that faith. Friday Prayer, on the other hand, is not a board-mandated practice for all students and only impacts students who have individually requested that particular religious accommodation.

It’s disputable whether or not there’s a significant difference between removing the Lord’s Prayer from Canadian schools and making religious accommodation for Muslim worship.  But it is indisputably false that “the Lord’s prayer was previously practiced by all students.”

In fact, students who did not wish to participate in reciting it were excused from doing so.  The Ontario court that rendered the decision on the Lord’s Prayer in 1988 took explicit note of that:

The Court noted that their decision took into account the fact that exemptions, though allowed for non-Christian children, were no salve to the real pressure to conform.

It is true that the “Lord’s Prayer versus Muslim accommodation” dispute requires proper framing, to set up a valid comparison.  But it is disingenuous to fail — as the school board does — to go ahead and frame it properly.

The dodgy silence on framing the two points matters.  Many Canadians understandably see it as inequality, or a form of special pleading, for one principle to be emphasized in rejecting a Christian practice, and another to be emphasized in “accommodating” a Muslim practice.

Observation six: this next is a tough pill to swallow for many children of the post-modern West.  But I believe more eyes are being opened to it.  The pill is this: there is no “void space” – no space free of positively-affirmed faith and commitment – that is ultimately defensible.  The reason is that no one will defend it.

We dance around this reality a lot in our post-modern world, but seldom acknowledge it.

Westerners prize freedom because it allows us to affirm and practice our faiths, without penalty or compulsion from an armed authority.  We do not prize freedom because we desire to be without faith.  It’s not freedom from religion that we seek; it’s freedom of religion.  The absence of compulsion creates safety for atheists and agnostics as well as minority believers, and that’s a good thing.  But effectively atheistic secularism is not the ultimate purpose of intellectual freedom, or freedom of conscience, as defined and cherished by the West.  No matter how many people embrace atheism at a given time, the greater motivational power of faith will continue to be observable, and meaningful.

It sounds to me as if what Christians and Jews in Canada need to do is demand religious accommodations from the schools.  All that should take is the certification of religious authorities that accommodations in the schools – for open worship activities in school facilities – are a necessary element of worship for their faiths.

Nothing dictates that what Jews or Christians have considered ritually normal over the last 50 years must prevail as their standards for religious practice for all time.  Both faiths can point to multiple references in scripture and historical tradition that indicate corporate, visible worship and/or worship on school days are important aspects of the faith.

Naturally, only people who want to participate in these things should do so.  But where people want to – and many will – the “secular” authorities can have no justification for saying no.  If they should say no, their mask of impartiality and equal accommodation will be dropped entirely – and the people will have reason to react accordingly.

Observation seven.  This is coming to America.  And very soon. 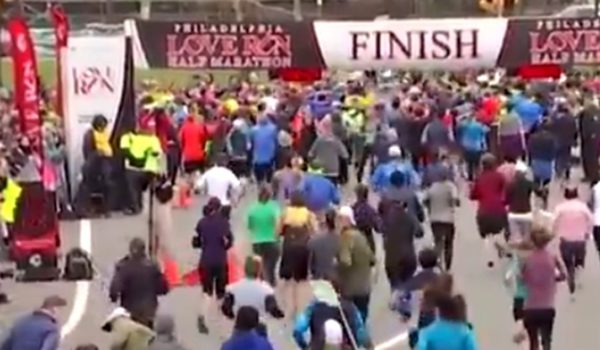 Tweet/Video of the Day: What came shining through at a half-marathon
Next Post
3rd time not a charm: White House fence jumper busted again