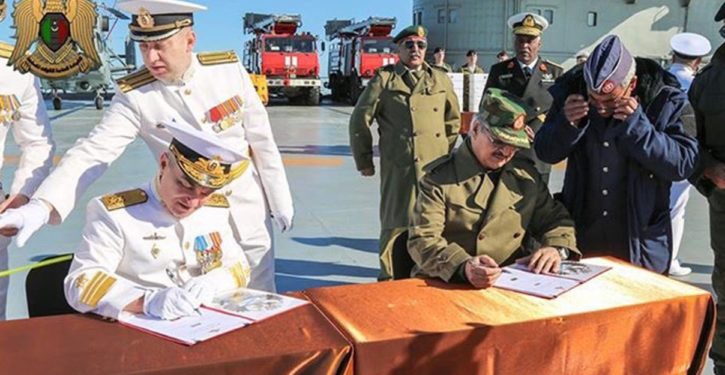 The play Russia is making for Libya broke into American consciousness this week, with a report from Reuters that Russia has deployed special forces to an air base in western Egypt, from which to support Libyan military commander Khalifa Haftar.

Haftar, 73, is a long-time Libyan military commander who helped bring Qadhafi to power in 1969, but ended up in the U.S. after he became a prisoner of war in Libya’s 1987 conflict with Chad.  Haftar was in America for 20 years, becoming a U.S. citizen.  In 2011, he returned to Libya after the Arab Spring meltdown and participated in the overthrow of Qadhafi.  Although he eventually came back to the U.S., he returned to Libya in 2014 when the first post-Qadhafi national unity government was dissolved, and reinvolved himself in Libyan politics and military activity.

Haftar became military commander in 2015 for a newly recognized unity government in Tobruk.  But the U.S. and major EU nations ended up backing the Government of National Accord, a separate entity with its power base in central and western Libya, in December of that year.  The GNA and Haftar, head of the Libyan National Army (LNA), have coexisted uneasily in the months since, with their power relations revolving around outside patronage, control of the oil and gas infrastructure, and posture vis-à-vis ISIS and its adherents along the Mediterranean coast, and the Islamist-dominated “National Salvation Government” holding pockets of territory in the west.

Fortunately, the rest of this will be easier to visualize and understand.  Russia is backing Haftar, who in the last few months has cleared Benghazi of rebels and seized back key petroleum infrastructure, putting it under positive control and making it increasingly useful for commerce again.  Haftar hasn’t been making overt moves against the GNA, but neither will he agree to a formal accord with it.  Haftar’s Libyan National Army, with its military success and territorial holdings, makes him a necessary component of a Libyan settlement.

Enter Russia.  Americans, who rarely ever have to worry about the dictatorship of geography, can never really grasp this, but Russia’s interest in Libya is not primarily about oil.  It is about oil, but it’s primarily about geography.  The coast of Libya commands much of the central Mediterranean – which is not a wide-open maritime playground, but a chokepoint, narrow and easily spanned by missiles, small ships, and patrol aircraft, between Europe (Italy) and Africa (Libya, Tunisia, and Algeria).

Oil and gas are important to have, but they are all over the place.  Russia is surrounded, and lives and dies by maritime chokepoints.  What’s interesting is when a key chokepoint that flanks Russia’s rich, economically powerful European neighbors, and enables her to dominate the Mediterranean Sea, is awash in oil.  That’s a place worth moving in on, and sitting on for as long as it takes to realize all its potential.

Soviet Russia did it during the Cold War, making a client of Qadhafi when he established his Libyan Arab Jamahiriyah.  The pushback from NATO, and its maritime dominance, kept the geostrategic value of the Libyan real estate limited back then.  But times have changed.  Now Putin’s Russia is back, seeking to bolster Haftar and gain the upper hand in settling Libya’s disordered affairs.

Europe has seen Russia’s play in operation for a while, and in February actually sought Moscow’s help in arranging a modus vivendi between the GNA and Haftar.  The next step would ideally be bringing Libya under consolidated national rule again.  Europe is anxious to get the country under control in part because Libya is the major jumping-off spot for migrants from Africa, which continue to overwhelm Italy.  Getting the Libyan petroleum industry back in full roar would also benefit European companies; Europe, from its own charmingly obtuse perspective, is prepared to partner with Russian companies to grow the value of that stake.

(Notably, the commander of U.S. Africa Command, Marine Corps General Thomas Waldhauser, said shortly after the European request was made that he “welcomes” Russian involvement.  I’ll postpone the tiring business of divining U.S. intentions in the post-Pax era for another time.)

It appears that Europe is in fact prepared to cede to Russia the geographic advantage Putin is seeking, with a decisive presence in Libya.  When the EU asked for Russia’s help last month, the Russian military had already held a high-profile meet with Haftar on the Russian carrier Admiral Kuznetsov, during its deployment to the Med, and was making its first special forces deployment to western Egypt (see the reporting on the new deployment from this week, which alludes to the earlier one).

Haftar’s visit to the carrier was attended by rumors of negotiations for Russian bases in Libya, which Russia ostentatiously denied by way of publishing photos and video of a brass-stuffed military encounter, with flag and general officers in dress uniforms signing things.

Indeed, Russia reportedly put contract mercenaries in Libya – in Haftar’s territory in the east – even earlier.  The mercenaries were officially there to do mine-clearing in the areas being brought under Haftar’s control.  They were in-country at the time of Haftar’s VIP visit to Admiral Kuznetsov, in January.

So the caissons are rolling along on this Russian move, and the new special forces deployment is just the latest development.  Russia denies the deployment, but Russia denied putting special forces into Ukraine, and we know how that turned out.  Putting Russian forces at an Egyptian air base isn’t just about the convenience of existing infrastructure; it’s about logistics, and moving material support for Haftar into Libya.  Russia and Egypt will formally deny it, until they don’t.  When they don’t, Russia will be able to make deliveries directly to Libyan ports.

I hope the old, outdated reflexive responses are mostly drummed out of folks by now.  Russia isn’t getting into a quagmire by doing this – not even with the remaining problem of an Islamist-threatened western Libya to solve.  You can only get into a quagmire in a place you don’t mean to stay in.  And Russia means to stay.

This newest business killer has sucked $1 billion out of the economy in just one year
Next Post
Divide and conquer: GOP-led Congress considers splitting the 9th Circuit Court