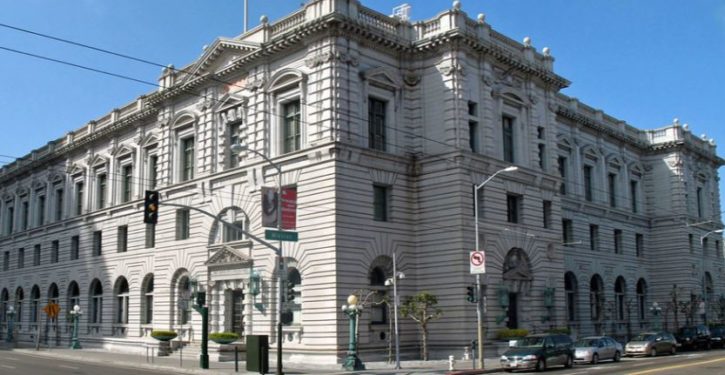 It couldn’t happen to a more deserving — or more liberally biased — court.

A House panel held a hearing Thursday on possibly splitting the 9th U.S. Circuit Court of Appeals. The 9th Circuit is recently serving as the primary antithesis to President Donald Trump.

Three 9th Circuit judges — Chief Judge Sidney Thomas, Judge Alex Kozinski, and Judge Carlos Bea — gave testimony before the House Committee on the Judiciary Subcommittee on Courts, Intellectual Property and the Internet. All three judges, like most of their 9th Circuit colleagues, support the current configuration and oppose splitting the court.

The subcommittee’s chairman, Republican Rep. [score]Darrell Issa[/score], said the court has become too unwieldy to operate efficiently. At 12,000 cases, the court hears twice as many appeals as the next largest circuit court per year. The court also has the largest geographic jurisdiction in the country, running as far north as the Arctic Circle and as far south as Arizona’s Grand Canyon. Fully one-fifth of the country’s population resides within the 9th Circuit. As such, the court’s massive docket generates lengthy turnaround times in decisions and can make access to the courts challenging for average citizens.

Democrats on the subcommittee argued that the administrative and logistical concerns Republican lawmakers raised were little more than a thin veneer masking their ideological hostility to the court. Rep. [score]Jerry Nadler[/score] said:

Like clockwork we see proposals to split the 9th Circuit whenever it hands down decisions with which conservatives disagree.

The 9th Circuit has long been in the sights of Republican politicians.

Democratic Rep. [score]John Conyers[/score] of Michigan was more circumspect. “I will not speculate why there has been such an interest among my conservative colleagues about splitting the 9th Circuit,” he said.

Judge Thomas told the committee that a second appeals court could not service the western states. He argued that the court has effectively built an administrative economy of scale, where non-judge mediators help adjudicate cases outside of court, court-designated officers dispense with basic motions, and a flurry of clerks manage vast reams of paperwork.

“Splitting the circuit will have a devastating effect on the administration of justice in the western United States,” he said. He also argued that a new courthouse facility in Phoenix would run $128 million, while a secondary facility in Seattle would run $54 million, a needless waste of taxpayer dollars.

“We have a large, centralized staff and the resources to solicit expert input,” he said. He added, contrary Republican critics on the committee, that Americans have more access to the 9th Circuit than any federal court in the country, because the court broadcasts and archives its proceedings on the internet.

“The 9th Circuit is on the cutting edge of bringing justice to the people,” he said.

Later in the hearing, Vanderbilt University Law School professor Brian Fitzpatrick, who testified in favor of splitting the court, argued one problem the court faces is the number of judges on the bench. As the number of judges grows, he argued, the odds of appointing ideological extremists increases. And as those odds grow, so too do the odds that these “outlier” or “activist” judges will be placed on appeals panels together. This, he argued, is why the 9th Circuit has a high reversal rate at the Supreme Court.

“The quality of judicial output decreases as the number of judges on an appellate court expands,” Fitzpatrick said, quoting Judge Richard Posner of the 7th U.S. Circuit Court of Appeals.

Speaking after the hearing, Issa strongly denied that his interest in splitting the court was ideological.

“It isn’t ideologically motivated with me,” he told The Daily Caller News Foundation. “I haven’t made any decisions. One of the challenges that I’m facing is how to configure the 9th Circuit, including Justice White’s concept.” Supreme Court Justice Byron White proposed creating three administrative divisions within the court to handle cases.

Similar legislation is currently being considered in the Senate.